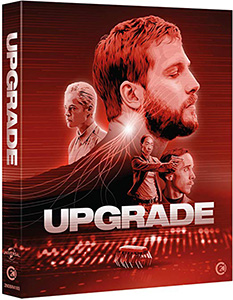 Technophobe Grey Trace (Logan Marshall-Green) lives in a near-future world where technology controls virtually everything. However, Grey shuns societies fascination and reliance on all of the high-tech gadgets, and spends his time restoring vintage cars.

One of Grey’s clients is a reclusive billionaire who has made his fortune through artificial intelligence, and when a brutal mugging leaves Grey paralysed and his wife dead, this eccentric client proposes a deal whereby Grey can not only seek revenge on the killers of his wife, but also be able to walk again.

Written and directed by Leigh Whannell (in only his 2nd time in the directors chair, though he has writing credits for multiple ‘Saw’ and ‘Insidious’ movies), Upgrade belies its $3M budget and looks like it could easily have cost 10 times that.

The cinematography draws you into a stark and sterile near-future where artificial lighting is as prevalent as artificial intelligence, while also flipping on itself to present a dark underbelly where people have embraced the seedier side of technology.

The narrative twists and turns, leaving you guessing as to some plot points, but also putting you in a position to be 1 step ahead of the characters onscreen and have you biting your fingernails as to whether the outcome will be good or bad from them.

Logan Marshall-Green is superb as Grace, a man who has to face his worst nightmares on multiple levels, and the fighting choreography perfectly fits into everything that the world has presented. Extra kudos to Logan for the training that he put in post-production, and which can be seen in one of the many fascinating special features.

Upgrade should rightfully find a place amongst the best sci-fi movies of the 1st decade of this millennium, and is one that should not be overlooked whilst bigger budget future based tales dominate your local multiplex.

This limited edition blu-ray should definitely be on your ‘to buy list’, and with Christmas coming up soon, you could even treat a loved one to it too.

Sit back and enjoy the ride…you won’t regret it.