Allow me to begin by listing a few movies:

If you are a fan of any of those cinematic masterpieces (yes, you read that correctly…masterpieces), then read no further and buy this IMMEDIATELY. You can thank me later. 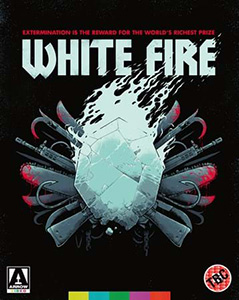 For the poor people whose lives haven’t included any of the above movies yet, allow me to continue.

While young children, brother and sister Bo and Ingrid Donnelly (Robert Ginty and Belinda Mayne) witness the brutal murder of their mother. This coming moments after their father has also been murdered by being burned alive, in what appears to be an onscreen fire stunt that went horribly wrong…not the last time the health and safety precautions are brought into question while filming this!

Skip forward 20 years and the siblings are in Turkey and embroiled in a plan to steal diamonds from a mine Ingrid is working at.

When the plan goes wrong, they find themselves mixed up in a race to steal the infamous “White Fire”: a huge glowing diamond…that can burn you…and has the ability to explode.

White Fire is an 80’s cheesefest at its best, where the less you know about the plot before watching, the more your jaw will hit the floor as its crazy action jumps from one scene to the next.

So, as not to give too much away, I shall end this as I started with a few bullet points. Read no further if you’re already committed to buying from what I’ve said so far.

However, if you need a little extra push before getting out your credit card and purchasing it (preferably through the Amazon UK links here on our website), here are a few things that are waiting for you:

I’m amazed that White Fire has passed me by until now, but thanks to this fantastic Blu-ray release from Arrow Films (complete with their usual selection of entertaining special features), I can now add it to that wonderful list of movies that always entertain me.

This is one movie that I’d have loved to have done a commentary track for!