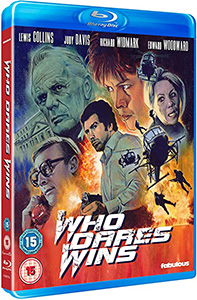 When SAS Captain Peter Skellen (Lewis Collins) assaults 2 soldiers while out on training manoeuvres, he is forced to resign his position and return to “civvy street”.

However, this is all just part of a masterplan so that he can infiltrate an anti-nuclear war group led by an ambitious and slightly deranged woman (Frankie Leith – Judy Davis) whose agenda is getting ever more aggressive.

Leaving his wife and young child behind so that he can go undercover, Skellen also gets “under the covers” with Frankie and makes her associates suspicious of him, especially as they are planning to invade an American Embassy residence and hold dignitaries hostage on the demand that a nuclear bomb be detonated in Southern Scotland so that the world can see the devastation it causes.

With Skellen caught on the inside and his cover blown, can he stop not only a nuclear explosion on British soil, but also the deaths of the people inside the building?

Of course he can…did you really think all this would culminate in him failing?

Despite a rather predictable narrative, the joy of watching Who Dares Wins is from seeing Lewis Collins (the best James Bond who never was) in some big screen action, following on from his already well established popularity in The Professionals.

A great supporting cast, including Richard Widmark, Edward Woodward and Ingrid Pitt, all add some gravitas to a situation that could easily have been played on a less serious note. In fact it is the interaction between the various characters that keeps the movie ticking along throughout its 2 hour running time, as the action sequences are few and far apart.

It is the SAS siege scene on the Embassy building at the climax of the movie which garnered all the attention at time of release, coming just 2 years after the Iranian Embassy siege in London was televised live and lifted the hitherto mysterious SAS into the publics consciousness as real life action heroes.

Eschewing the over the top spectacle of bigger budget Hollywood action movies, the end scene is grounded more in reality and is all the better for it, as the SAS methodically make their way through the building eliminating anyone who gets in their way.

Who Dares Wins is definitely a movie of its time, but thanks to a strong cast portraying engaging characters (the SAS leader who constantly shouts, even when on the phone, always has me laughing) it is still an engaging watch and overcomes its now slightly dated look.

Review by Dave from a disc kindly supplied by Fabulous Films..