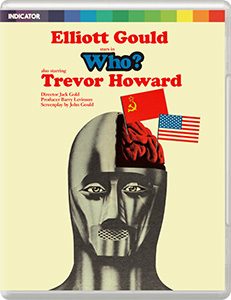 Adapted from the novel by Algis Budry, Who? is a mixture of cold war thriller and sci-fi adventure, where the narrative keeps you guessing as to the final outcome right until the end.

When acclaimed American scientist Dr. Lucas Martino (Joseph Bova) is involved in a car accident on the East German border, Soviet scientists save his life with a bizarre procedure that essential turns him into an unrecognisable robot…think of the Tin Man from The Wizard of Oz after eating far too many donuts.

Returning to America, the government are suspicious if it really is Martino that is underneath all that metal, or a spy masquerading as him in an attempt to steal the secrets of a project that Martino was working on.

FBI agent Sean Rogers (Elliott Gould) is tasked with trying to deduce if Martino is who he says he is, but this is far more difficult than once expected.

Is he really Martino or a spy? A twisting non-linear narrative leads you to think one thing and then another until the very end.

Who? is a very ‘talky’ movie with little action, but with a cast that includes Elliott Gould, Trevor Howard and a superb performance by Joseph Bova, the characters are believable and immerse you into the world.

Its low budget limitations do show at times, but it is the fascinating weaving storyline that keeps you hooked and trying to second guess all that is happening onscreen.

The script outthinks you as questions such as “why not take fingerprints from his remaining arm as proof?” spring to mind, only to be answered by Sean Rogers with “That way I’ll definitely know the arm is Martino, but not the rest of you”. Damn you FBI agents and your logical thinking.

One of the joys of watching Who? is trying to figure out if it really is Martino, and also how it will all end…buy this and find out.

Yet another Indicator release that I knew nothing of beforehand and came away thoroughly enjoying it.

As always, a superb set of special features expanded my knowledge and appreciation of the main feature.

Thursday evening @DastardlyJabby & @ApeMutterings are recording a Spotlight Reflection show about Class of 1999. Any comments/questions for them please? They'll read them out/answer them on the show. #podcast pic.twitter.com/bvkDuHLrtX

RT @Ray_Harryhausen ANNOUNCEMENT FROM THE TRUSTEES REGARDING 'RAY HARRYHAUSEN: TITAN OF CINEMA' EXHIBITION- Our centenary exhibition at the @NatGalleriesSco has been postponed- we hope to share the new opening date soon. Read a statement from the trustees: rayharryhausen.com/ray-harryh… #Harryhausen100 pic.twitter.com/A2EVxtV57O