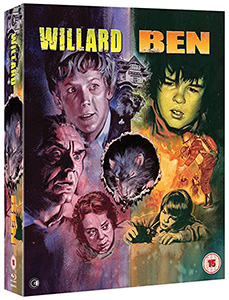 “It’s like a damn safari with all these rats!”

Cult media distributor Second Sight Films have done a first-rate job of restoring this almost forgotten forerunner of not only the creature feature genre, but also psychological horror movies. Based on Stephen Gilbert’s 1969 short story “Ratman’s Notebooks”, Willard is neither as thrilling as Jaws nor as chilling as Carrie, but its paw-prints are undeniably all over both 70’s classics.

Meek introvert Willard Stiles (Bruce Davison, in only his third role) is bullied by his boss (Ernest Borgnine) and henpecked by his decrepit mother (Elsa Lanchester). A social misfit among humans, the downtrodden 27-year-old finds an affinity with a handful of rats nesting in his garden. Refusing to kill the verminous intruders, instead Willard hides his furry new pals in his cellar, feeding and training them as their numbers grow into a heaving horde. Could they be the answer to all his troubles at home and at work…?

“Sometimes I think you’re trying to kill your mother!”

Self-categorised for PR purposes as a “natural horror,” for long stretches director Daniel (father of Michael) Mann’s film is no scarier than a domestic drama. Often, the brightness of many of the scenes and the lively/gleeful tone of Alex North’s score belies the mania bubbling beneath the surface. While there are occasional instances of blood and an unsettling quality to Willard’s increasingly wild hysteria, modern horror fans will find this thriving rat-pack unforgivable tame. Two violent sequences are to some extent diminished by the obviousness that the rats are being thrown at the people they are meant to be attacking.

“I’m sorry to have been such a disappointment…”

Tame by today’s standards, but Willard was a monster hit upon theatrical release, inspiring many and spawning a sequel (which Second Sight have also restored and packaged together with the original in a neat-looking Blu-ray boxset). It’s a shame that it has taken this long to do the film justice on home release, but this high definition restoration is sublimely handled, with the inclusion of lo-def trailers and TV spots highlighting how crystal clear the 4K scan of the original camera negative is.

Due for release at the tail-end (sorry!) of October, the disc has further bonus content in the shape of a photo gallery, Bruce Davison commentary and a 12-minute interview with the anecdote-ready star. The double feature boxset comes housed in newly-commissioned artwork by Graham Humphreys and contains an exclusive and eye-catching foldout poster. A review for 1972’s Ben will follow.

Willard/Ben will be released on October 30th and you can buy it by clicking HERE. ALL money raised by purchasing from Amazon via our website is given back to our listeners and followers in upcoming competition prizes. The more people buy, the bigger our prizes!

Review by Chris Howard from a disc kindly supplied by Second Sight Films.