Review: The World at War 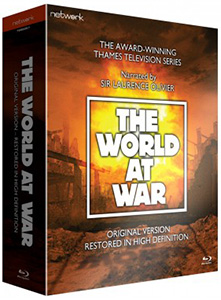 There are certain documentary television series that made an impact on me as a kid: Kenneth Clark’s Civilisation, Carl Sagan’s Cosmos, and The World at War. My father, born in 1934 and interested in WW1 and WW2 would sit and watch, and I vividly remember sitting with him, hearing Carl Davies’ haunting theme tune at the beginning of each episode. So this programme and I have history.

It was a delight for me to review this new release from Network and this ‘Ultimate Restored Edition’ is the definitive version of one of the greatest documentary series ever made. Each frame has been painstakingly restored and the audio enhanced and upgraded so that this is the best this award-winning series has ever looked and sounded.

I thought perhaps its narration by Laurence Olivier would somehow date it and the very content would by now be jaded, after all, each era and generation sees history through its own experience, so what was thought in 1973 is vastly different to what we now think. One must also remember that when this was first on television, the majority of audience would have actually lived through WW2.

However, over 26 episodes this series, perhaps for the first time, collated real people who experienced first hand the atrocities of this period Archive footage is used to great effect and this helped create something new for a historical documentary, creating one of the most powerful and hard hitting series on TV.

But does it hold up? A resounding yes, it is without a doubt GRIPPING, despite its age. A story from the beginning of the rise of Hitler and the Socialist Nationalist party to the end of WW2, and the ‘cleaned up’ transfer and audio only add to the experience.

It is a wonderful series, heartfelt and in my opinion a precursor to the excellent ‘The Nazis: A Warning from History’. I must admit my forte in history is the early modern period (The Renaissance/Tudors to Charles 1st) and have never been particularly interested in the world wars. This series MAKES you interested. Absolutely essential for any history/WW fan.

Review by Tina (co-host of 60 Minutes With) from discs kindly supplied by Network on Air.

I used to live in Los Angeles and write about Rock bands. Now I live in wonderful Wales and write about films. I like video games (especially RDR2) and am also a painter...gratuitous plug: follow my art account on Instagram @artbytinar
Review: Kes S.O.S – Land of the Free