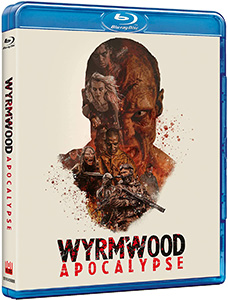 Having not watched 2014’s Wyrmwood: Road of the Dead, I went into this sequel hesitant as to how much of the narrative would be reliant on a knowledge of the events so far.

I needn’t have worried though, as despite some of the lore of this particular undead universe being unfamiliar to me (the “zombies” being able to power vehicles and machinery through their green breath being one example), the crazy characters, Mad Max-esque post-apocalyptic locations and crazy action sequences drew me into everything immediately.

Rhys (Luke McKenzie) is a military guy who tracks down survivors of the zombie outbreak and takes them to “The Surgeon” (Nicholas Boshier) who uses them to search for a cure…or so he says!

Rhys teams up with Maxi (Shantae Barnes-Cowan), along with brother and sister Barry (Jay Gallagher) and Brooke (Bianca Bradey) in a race against time to overcome the surgeon and try to find a cure.

Wyrmwood: Apocalypse is violent, stylish, bloody, silly, and hardly ever slows down to allow you to take a breath before another hugely enjoyable ridiculous scene begins, all with a bloody streak of pitch black humour running continuously through it.

The budget didn’t seem to be too high, and this shows at times with the cinematography, while the acting is just the right side of being too hammy and kept me invested in all of the characters, with Luke McKenzie and Shantae Barnes-Cowan being particular highlights for me.

Nicholas Boshier chews up the scenery in every scene that he is in…as should any “bad guy” in a movie like this, and at times verged on morphing into a pantomime villain with me wanting to shout “he’s behind you” at the screen.

I had a lot of fun watching Wyrmwood: Apocalypse, so much so that I’ve already put Wyrmwood: Road of the Dead onto my watchlist.

Hopefully the story isn’t finished yet and I can be taken back for another kinetic ride around this zombie fuelled world.

Review by Dave from a disc kindly supplied by 101 Films via Aim Publicity.