I think it’s important to begin by saying that my knowledge of WWE wrestling is limited to occasionally recognising some of the stars of the 80’s (Hulk Hogan, The Ultimate Warrior, Bret Hart, etc), but even back then I didn’t watch any of it.

I’ve also never played any wrestling games, and even fighting games in general (e.g. Street Fighter, Soulcalibur, etc) have never appealed to me, with the few times I’ve tried them descending quickly into frantic button mashing before I move on to the next RPG, car racing or simulation game.

Having said all of the above, it should hit all the harder (no pun intended) when I say that I can’t remember the last time I had as much fun playing a video game as I have had with my time so far enjoying all the various modes in WWE 2K22.

So lets begin with the different modes.

To begin you should definitely play through the tutorial section in the “Play” option of the home screen. This will walk you through the control scheme and get you used to the variety of hits, grapples and combos available to you in the game.

Unlike some of the aforementioned fighting games I’ve tried in the past, WWE 2K22 doesn’t task you with remembering a ridiculous amount of button presses and other finger entangling inputs to create a good flow of offensive and defensive movements. Everything is clearly explained and the simplified inputs make it much easier to feel that you’re really in control of the wrestler, while also still allowing you to pull off a great variety of moves within a short time of starting the game.

Once you’ve completed the tutorial you can stay in the “Play” section of the home screen and choose to dip into any of the following play modes:

All of the above are great ways to get yourself used to the control scheme and use different wrestlers to see all their different moves and how different weight classes and wrestling styles match up against each other.

“Showcase” mode is a single player objective-based story mode focused on the career of Ray Mysterio, allowing you to play through significant moments of his career while also giving you specific objectives to complete throughout the match, which makes it a great way to embed some moves into your muscle memory after completing the tutorial.

There are real life video clips of Ray talking about each match-up, which I found fascinating as I didn’t know anything about him prior to this.

Also adding to the immersion is the way that 2K use “Slingshot Tech” to transition between real life footage and gameplay, adding an extra layer to feeling like you really are representing Ray as you play through this mode.

Having been a fan of management simulation games since the likes of Football Manager and Head Coach on the ZX Spectrum, it was MyGM mode which peaked my interest the most upon loading the game.

You assume the position of a General Manager from either the 5 choices before you (each with their own particular perks which can be used by your roster), or create a custom manger.

Then it’s time to choose a brand from either Smackdown, Raw, NXT, or NXT UK, before picking your GM opponent, their chosen brand, the AI difficulty, the duration of weeks to play over and much more.

Diving into the draft it is time to pick your roster of wrestlers to represent you and choose which of them you want to represent you as your men’s and women’s champions, which gives them a bonus to their stats.

This doesn’t lock your roster into just those wrestlers though, as you can add more through signing free agents and legends, as well as losing some if you don’t take notice of their needs and wants as you progress throughout your managerial career.

Booking the shows is all about pairing the right wrestlers together, putting them in the correct position in the show, using the right arena/road crew/special effects/advertising, and of course keeping a close eye on your finances.

Once everything has been booked you can either simulate/spectate/play the match (with certain configurations only allowing you to simulate it, i.e: if there is a “run in” happening during it), before a detailed breakdown of how you and your opposing manager have faired, with your focus being on ending as the top team after the allotted weeks have been completed.

MyFACTION can lazily be compared to the likes of FUT and MUT modes in FIFA and Madden because you collect cards of wrestlers to use and have the ability to upgrade them, but there is more to it than that.

As you play you acquire and spend 4 different types of virtual currency to add more wrestlers, managers and perks to your card collection, and then choose one of the 3 game modes to play through.

“Proving Grounds” is probably the best place to start, as you progress through a series of challenges. “Faction Wars” puts you into 4 vs 4 matches to win limited time rewards, while “Weekly Towers” gives you a new tower of challenges to fight through for even more rewards.

Creating your own custom wrestler, you journey through their career from a rookie to the ultimate aim of becoming a superstar.

Branching storylines and decisions to make in both unique men’s and women’s divisions, means that there is a lot of deployability if you want to see everything this mode has to offer.

Universe Mode is a wrestling sandpit mode to do with as you like, and you can recreate favourite events from the past or make up virtually anything you want with all the options given to you.

Speaking of options, the creation options in this game are incredible, from giving you the tools to make your own events, to the in-depth character creation mode where the level of detail in making someone had me transfixed for hours…you can even import actual photos of people’s faces to overlay in the game for an added level of realism if you’re not too confident tweaking every minute detail of people’s features and physique that the game allows you too.

I went for a 60MW branded version of myself…but made younger…and without the grey hair…I am of course naturally that muscular though…ahem! 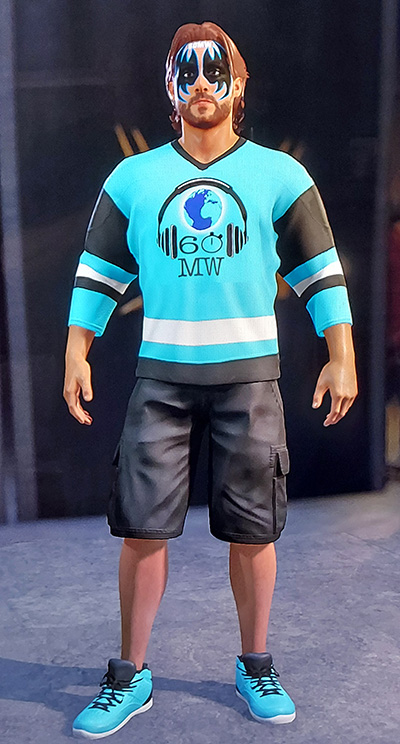 There is a LOT to do in WWE 2K22, and no matter how you want to play, from a quick 1 vs 1 with a mate, through to a full career in MyGM, it’s all here to enjoy.

The only issues I’ve had with the game so far have been one time in single player mode where the screen went black in the middle of a fight, and some lag while playing online with custom characters. Other than that it has all played smoothly, though of course that always varies from player to player with any game.

Hardcore WWE fans and regulars of this series of games may well have got this far and are crying out that I’ve not mentioned this or that, but this review (as started at the beginning) is coming from someone unfamiliar with the wrestling world and this genre of games, and so to anyone reading this who is in the same boat as me and would normally pass over this game without a second look, I say; give it a chance, you may well find yourself having as much fun with it as I am…and I could have written many more paragraphs about the intricacies of each mode too. There’s a LOT to discover!

At the end of the day, whether it be playing video games or watching movies, the bottom line is I want to enjoy myself…and DAMN I’m very much enjoying myself with this game.

Review by Dave from an Xbox review code kindly supplied by 2K.