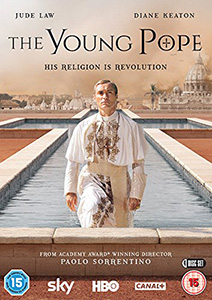 American Lenny Belardo (Jude Law) is surprisingly voted in to be the youngest pope in history.

Having gone to a Convent school, and being somewhat ‘familiar’ with the rather odd lives of priests and nuns, I admit I was a little apprehensive about this series. I wrongly assumed it would be some grand, HBO look at the catholic church and Jude Law’s involvement would be solely as eye candy while being earnest. However, The Young Pope is quite refreshingly subversive.

Glorious to look at (is the Pope robe Versace?) the inner (gold lined) sanctums of Vatican City and its gardens denote its vast wealth, and again, oddness.

Here we have little orphan Lenny, lost and unloved and dropped off at the local convent to be brought up by Sister Mary (Diane Keaton) who he brings to Rome on his sucession as Pope. ‘Oh’ I thought ‘This could be almost Shakespearian, Diane will be Lady Macbeth to Judes…’ Nope. Poor Sister Mary is manipulated and as mistreated as everyone else in this show. He refuses to be seen and addresses the faithful in shadows, he won’t allow his image to appear on anything, despite the Vatican depending on selling crap at the gift shop to fund itself. What is he up too? Nobody knows how to respond to him, least of all the Secretary of State, Cardinal Voiello (Silvio Orlando).

Lenny is as cold as ice and treats everyone with distaste, barking his subversive orders at those around him (who seem to be in shock). He’s cold and calculating and while seeming to have some grand plan behind his machinations, you get the feeling that at heart, he’s just an impolite arsehole, an ultra conservative, a spoilt bully, a Machiavellian Prince who is just mixing it all up for his own amusement. Or is he?

Review by Tina (co-host of 60 Minutes With) from discs kindly supplied by Aim Publicity.

I used to live in Los Angeles and write about Rock bands. Now I live in wonderful Wales and write about films. I like video games (especially RDR2) and am also a painter...gratuitous plug: follow my art account on Instagram @artbytinar
December 2016 Entertainment Show Review: La La Land