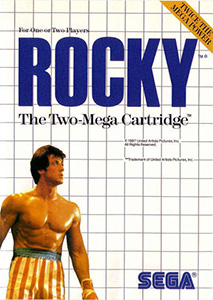 Sylvester Stallone recently said at the 2016 Golden Globes, “I want to thank my imaginary friend Rocky Balboa for being the best friend I ever have”. He said this as he collected his award for best supporting actor for his amazing performance in the wonderful Creed.

Although Stallone has played many fantastic characters, I think it’s fair to say that Rocky is his most iconic. This is a character that has endured for 40 years and watching Creed it hit me like a left hook that you’ve not only seen Rocky change on the big screen, you’ve seen Stallone change as well. Watching his performance in Rocky from 1976 compared to 2016 with Creed, it’s astonishing seeing how far the character and man have come. Both have had some incredible highs and some terrible lows but like Rocky says in Rocky Balboa, “it ain’t about how hard ya hit. It’s about how hard you can get hit and keep moving forward.”

I think by now everyone knows the real life story about how Stallone was penniless at the time he was asking studios to consider making Rocky and how he was offered a huge amount of money to sell the script; except he wouldn’t budge unless he played Rocky.

Just for a second imagine how different cinema would be without Stallone playing this part. Imagine how different life would have been for Sly. Imagine how different life would be for the millions of people (including our illustrious leader, Dave) who have climbed those famous steps in Philadelphia mimicking Rocky on his incredible journey. People climb those steps for their own reasons. Some do it because it’s the tourist thing to do, some do it because they have got over cancer or some other terrible tragedy. The point is that climbing those steps means something special to that person and is a symbolic gesture about triumphing over adversity, remaining positive no matter what and achieving your goal. Imagine that not being there.

The real life story behind Rocky and story of Rocky itself is such an inspiration to millions of people, so imagine how different life could have been if Sly had taken the money and run. Crazy right!?

Anyway, forgive me for going off on a tangent but I love thinking about how these small, almost insignificant decisions can change the course of history. It’s fascinating stuff!

So, back to the game! The first thing to strike you about the game is the massive Rocky name scrolling across the screen and then the famous pose of Rocky after he beat Ivan Drago in Rocky 4. The box of the game boasts, “twice the mega power” and to be fair you can see it with the graphics looking very nice indeed.

As you can imagine, Rocky is a one on one beat-em up and whilst not necessarily being in the same league as games like IK+ or Street Fighter 2, it does stick very closely to the Rocky movies giving you one of the best Rocky gaming experiences.

During the course of the game you take on Rocky’s most famous opponents, Apollo Creed, Clubber Lang and Ivan Drago. Each character resembles their real life counterpart and seems to have their own strengths and weaknesses similar to the movie but we’ll get into that later.

At the start of each fight there is a training mini game similar to the montages in the movies and gives you the feeling that you really are training for a big fight. Essentially they are mostly button mashers where you need to achieve a certain target but they look fantastic with a wonderful graphical representation of Rocky and in one case, Mickey. Disappointingly there is no chicken chasing or meat punching mini game.

The rules are that each bout can last for 15 rounds and you are scored points on how well you fight. If you are knocked down three times in one round then the other player wins. After each round you have a lovely visual representation of the fighters in their corners getting rubbed down and receiving treatment. If Rocky is knocked down the game switches to your corner and you need to hammer the buttons as Mickey is frantically banging the canvas trying to get you back to your feet.

In true Rocky style let’s take each fight one match at a time.

The training for this match focuses on power as you need to tap the buttons as fast as you can whilst hitting a punch bag. Rocky changes up his punches landing uppercuts, hooks and straight jabs. Once you complete this training you fight Apollo who is wearing his famous red, white and blue trunks. In all honesty, Apollo isn’t very tough to beat so you won’t need to duck or block much.

One of the nice little touches and a sign that the makers of the game actually watched the movies is that after you beat Apollo, you get his famous trunks. For this match your training focusses on speed as you have to keep up the pace hitting a speed ball. Clubber is a much tougher opponent than Apollo but I found that I had a lot of success with body shots to take him down.

The third and final fight is against arguably Rocky’s toughest opponent, Ivan Drago. To train for this match you work on your accuracy and see Mickey holding the mitts as you aim each punch in the direction of where Mickey moves the gloves. This really is the toughest fight in the game as Drago hits like a mule and takes a lot of punishment before being knocked down. I could always complete this game when I was a kid but now I’m afraid it gets the best of me. I blame Drago’s use of steroids!

Rocky the game reminds me a lot of the character. It is a little rough around the edges but if you are willing to look past this you cannot question the size of its heart and willingness to try and provide an authentic Rocky experience.

Graphics – Rocky really is one of the most colourful games I’ve played on the Sega Master System. The graphics are excellent with all of the characters looking fantastic. 8

Sound – The music is fine but there isn’t the famous Rocky music which is a shame. 7

Playability – Although not the most technically accomplished fighting game, the training mini games more than make up for it. 7

Re-Playability – Rocky is a bit of a button masher but it is still fun to play. 6

Overall –Although the gameplay isn’t the best the makers of the game have really captured the spirit of the Rocky movies. The graphics are excellent and it is well worth checking out especially if you are a fan of the series. 7

I love video games and movies as much as I love my children. However, I'd rather face off against the worst end of level boss, and watch the scariest horror movie than visit another soft play! Thanks for taking the time to visit the website and read this review. Please send any complaints to Dave and any money to me!
Interview with Lisa London Review: Young Rebels