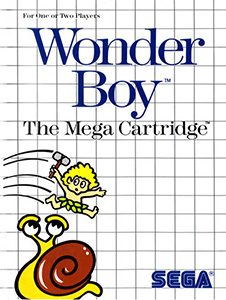 Wonder Boy is a strange one for me. It’s never considered a particularly great platforming game or even generally mentioned in the same breath as Mario or Sonic and yet it holds a special place in many people’s hearts, including mine.

Playing Wonder Boy is one of my earliest arcade memories. There was something that captivated me as a child about that blonde haired cave-boy, jumping across platforms accompanied by some really cheerful catchy music.

I can distinctly remember the bus ride home with my mom, holding the Sega Master System cartridge in my hand being really excited to play the game that I loved so much from the arcades. This alone is another reason why I loved my Sega Master System, as it had so many of my arcade favourites such as Shinobi, Operation Wolf and Wonderboy,

Wonder Boy would have two more games on the Master System which I also sank a lot of time into. Wonder Boy in Monster Land added basic RPG elements to the game with shopkeepers and the ability to buy new weapons. At the time this seemed like a massive leap (if you’ll excuse the pun) from the first game. Then Wonder Boy The Dragon’s Trap would quickly become my favourite game on the Master System and was completed multiple times. The beautiful colourful graphics and ability to change into different animals to complete your quest seemed magical to me. Maybe I’ll replay them in the future to see if they still hold up?

The premise for Wonder Boy is very simple; your girlfriend has been kidnapped and you must save her. For a game with little to no story, amazingly the manual is 70 pages long! You’re lucky if you get a slip of paper with games today.

Wonder Boy is a side scrolling platforming game where the aim is to jump over bad guys such as snails and frogs whilst avoiding fire and rolling boulders.

You find giant eggs which hold items to help you in your quest such as a hatchet to take out enemies, a guardian angel making you temporarily invulnerable and a skateboard. The only problem with the skateboard is that although you can slow down you can’t actually stop moving so timing jumps becomes even more tricky. The one advantage is that you are able to take an extra hit from enemies.

There is also a vitality meter which reduces after time and whenever you stub your toe on a rock. However don’t worry, as there are plenty of fruit and vegetables to help keep up your energy.

If I’m brutally honest the jumping feels quite spongy and a game like this lives and dies by how well it controls meaning frustration can set in quite quickly.

The graphics are nice and colourful and still look good for a game that is almost 30 years old. The music is still really catchy and I found myself humming the theme tune long after I’d shut the game off.

Wonder Boy is extremely tough and unfortunately time hasn’t been kind to my ageing reactions meaning that I could barely get past the third level.

Graphics – Bright and colourful as you would expect from the Sega Master System and this is a good port of the arcade game. 6

Sound – The sound and music are basic but the theme tune will be playing in your head for the rest of the day. 5

Playability – Wonder Boy is simple fun but can be frustrating due to the jumping not being as responsive as it should be. 4

Re-Playability – Levels tend to repeat themselves adding a new monster here and there but you will be doing the same thing over and over again. 4

Overall – All in all Wonder Boy isn’t as great as I remembered but it still takes me back to the time when I first started to fall in love with video games and for that reason it will always remain one of my favourites. 5

I love video games and movies as much as I love my children. However, I'd rather face off against the worst end of level boss, and watch the scariest horror movie than visit another soft play! Thanks for taking the time to visit the website and read this review. Please send any complaints to Dave and any money to me!
Entertainment Chat Catch Up Show Review: The Friends of Eddie Coyle