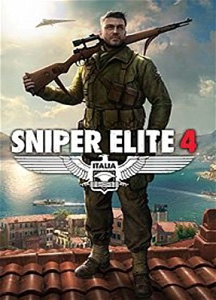 My history with the Sniper games starts with Sniper Elite 3, which I played co-operatively online with a friend. We had lots of fun working together as he would watch from afar, spotting enemies, as I snuck into a German encampment quietly taking out soldiers. The other game series we played together was Zombie Army Trilogy. This is a slightly more tongue-in-cheek take on World War Two, where you have to stop an army of undead Nazis from taking over the world.

These games are very different in tone and yet share similar characteristics as they are made by British developer Rebellion. For anyone who hasn’t played Sniper Elite before, it is a third person action based stealth game set in World War 2. Rebellion have found a winning formula with this series and, Sniper Elite 4 shows how far the team have come, as it is probably their most confident entry into the series.

The events of Sniper Elite 4 take place in 1943 Italy, where you play the role of sniper Karl Fairburne, who is helping the resistance fight the fascists. If I’m completely honest the story and plot aren’t that important, as it is the gameplay that takes centre stage.

Compared to Sniper Elite 3, the latest entry in the series feels more open in terms of a sandbox, where you get to choose multiple ways of tackling each objective. In fact, the smallest levels in Sniper Elite 4 are three times larger than in any previous game.

You start off by speaking to members of the resistance to get information about your primary and secondary missions. Secondary missions don’t have to be completed to progress however, you are rewarded with additional experience should you choose to do them. I found that although I wasn’t drawn into the story aspect of the game, I wanted to complete all the objectives because I was having so much fun.

There are lots of weapons and equipment in the game and you start with a sniper rifle (naturally), machine gun, pistol, and a whole host of traps such as mines, trip wires and TNT.  A lot of the weapons and items have a secondary usage for instance, hand grenades can be modified and changed into sticky grenades. You can choose to throw a rock to distract a guard or whistle to get them to investigate the noise. All of this is handled very well with the press of a button opening an inventory wheel which when selected, slows down time as you choose your weapon or item.

Within a few minutes of starting a level you realise that you are hopelessly outnumbered as there are German troops all over the map. However, one of the greatest achievements of the game is that you feel like the hunter rather than the hunted. I can honestly say that there are very few games that made me feel as empowered, or to put it bluntly, a total badass!

I’m not usually into stealth games but, it was absolutely thrilling sneaking around, watching enemy patrols with my binoculars and then creeping up on them taking them out quietly with my knife, or sniping them from afar.

The environment and sound play a massive part in the game and using it to your advantage will determine your success or failure. Sabotaging a nearby generator or waiting for a plane to fly overhead so you can mask your shots works really well. Planting a mine in the street and hiding in nearby bushes waiting in anticipation for a convoy of trucks and the impending destruction felt so satisfying.

It is credit to the makers of the game that the world feels so alive and organic. You actually feel like the soldiers patrolling are doing a job, as you can listen to their conversations and pick up letters they are sending to their family. This gives the game an extra level of polish that I wasn’t expecting but, I really appreciated as it helped to immerse me even more.

Sniper Elite 4 gives you the opportunity to play the game how you want. You can sneak around the map using cover to take out the enemies slowly or, go in guns blazing and let all hell break loose. I found that I enjoyed mixing it up and there were often times where I would spend a couple of hours stalking my prey and when I was spotted, run around like a lunatic with my machine gun!

I would advise against going toe to toe with the enemy because they can be lethal and will kill you extremely quickly. Even on normal difficulty the enemies are very clever and will triangulate your position based on where you were last seen or where they heard a shot. There are different types of enemies ranging from bog standard infantry, spotters who will call in air strikes, radio operators who will request additional support to more experienced troops and snipers. Being spotted by snipers can be an incredibly tense game of cat and mouse, as you get a few seconds to react based on the flash from their scope.

It’s also worth noting that your breath control is essential and if you are running around the map you will become a less effective sniper, as you will be out of breath and unable to accurately aim your rifle.

It’s not the end of the world if you are being hounded by the enemy, as it offers other opportunities to take them out. There is nothing quite like being pursued, planting booby traps on dead enemy soldiers, setting up trip wires and then finding a safe location to watch the carnage unfold through your binoculars.

I hate to use the word gimmick as it feels like a disservice to the overall game, but for anyone who hasn’t played a Sniper Elite game before the kill camera is a mainstay of the series. Essentially when you fire your rifle with an accurate shot, there will be a slow motion view of the bullet leaving your gun and taking out the intended target. Just as the bullet enters the enemy soldiers body, the camera changes to an x-ray style viewpoint of how the bullet is destroying the targets body. Bones splinter and chunks of brain splatter, even testicles explode and it’s gloriously disgusting, and truth be told, it never ever got old.

Graphically the games looks great and is a clear step up from previous games. The Italian landscape is put to good use and has you sneaking through small villages, vineyards, beaches, hillsides and castles.

I came into Sniper Elite 4 with some experience of the series but, if I’m totally honest I had no idea it was going to be as good as it was. It’s early days but, Sniper Elite 4 is already a contender for one of my favourite games of 2017 and Rebellion deserve massive credit for making an absolutely fantastic game.

Review by Chris (co-host of 60 Minutes With and The Same Coin) from a review code kindly supplied by Rebellion.

I love video games and movies as much as I love my children. However, I'd rather face off against the worst end of level boss, and watch the scariest horror movie than visit another soft play! Thanks for taking the time to visit the website and read this review. Please send any complaints to Dave and any money to me!
January/February 2017 Entertainment Show Review: Cover Girl