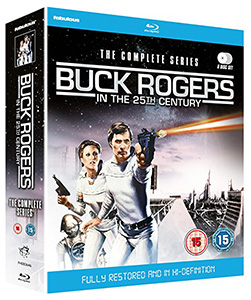 The success of Star Wars at the cinema in 1977, not only began a series of similar ‘space themed’ movies being released onto the big screens worldwide, but also rejuvenated the genre on television too.

Battlestar Gallactica ran from 1978-79 and was created by the great Glen A. Larson. It was while Battlestar was still in production that Larson started work on Buck Rogers in the 25th Century, even utilising some of Battlestar’s props, effects shots and costumes.

The series centres on Captain William Anthony ‘Buck’ Rogers (Gil Gerard); a NASA/USAF pilot whose spacecraft suffers a life support malfunction while on a mission in 1987, and he is frozen for 504 years before being discovered in the year 2491.

That one line synopsis alone was enough to get me hooked on the series when it originally aired over here in the UK. The possibilities for storylines were endless, and the whole idea of being ‘a fish out of water’ in the distant future could (and did) lead to some laughs.

Buck learns that Earth was devastated by a nuclear war in 1987, and that civilisation has been rebuilt under the protection of the Earth Defence Directorate, who quickly use his skills as a pilot, and also have him going undercover to foil the many ‘devious plans’ that are plotted against the EDD. A lot of these plans are made by Princess Ardala (Pamela Hensley), whose spacecraft first discovered Buck as he floated through space. Her desire to conquer earth is only matched by her desire for Buck.

Aided by Colonel Wilma Deering (Erin Gary…whose figure hugging lycra outfits where often the reason that Dads tuned into the show, as well as their kids) and Twiki: a small robot that often emitted a “biddi-biddi-biddi” sound that was copied in school playgrounds the length and breadth of the country. On the chest of Twiki was Dr Theopolis: a disc shaped sentient computer with a digitised face. ‘Theo’ understood Twiki’s language and translated what he said. He was also often the voice of reason on missions…a voice that Buck usually ignored and went off on his own plans, much to the chagrin of Dr Theopolis.

With so many possibilities for Buck’s adventures, quite a few of the episodes are split over 2 parts. This gives the classic ‘cliffhanger ending’ to an episode, while also allowing for a fuller narrative to be played out.

Season 2 saw the departure of a few characters, most notably Dr Theopolis and Princess Ardala. Wilma’s image was ‘softened’ to make her more ‘feminine’ and remove her from her militaristic character from season 1. Another change was sending Buck, Wilma and Twiki (whose voice changes for a few episodes due to Mel Blanc’s voice talents leaving the show for a while…it still didn’t stop all the kids continuing to go “biddi-biddi-biddi” all the time though) into space to find lost pockets of humanity who had fled Earth since the nuclear war.

With ratings sadly dropping, the series was cancelled with no final episode that wrapped up any loose ends, it was just a regular standalone episode.

I have great memories of watching Buck Rogers in the 25th Century back when it was aired here, and it is a show that I’ve never watched on any reruns, indeed I can’t say that I’ve ever really noticed any reruns of it, at least not in any primetime slot on a prominent channel. So it is fantastic that Fabulous Films have released this Blu-ray boxset of the complete series. The picture and sound are great, and I was instantly transported back to being a teenager as soon as the theme tune began playing.

Buck Rogers in the 25th Century still holds up today as solid family entertainment, and this is by far the best way to watch it.

You can buy Buck Rogers in the 20th Century by clicking HERE. ALL money raised by purchasing from Amazon via our website is given back to our listeners and followers in upcoming competition prizes. The more people buy, the bigger our prizes.

Review by Dave (host of 60 Minutes With) from discs kindly supplied by Fabulous Films.