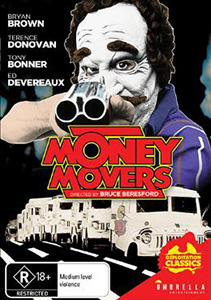 ‘Darcey’s Security Services’ moves a lot of money every day, and anyone with thoughts of robbing them would probably need someone ‘on the inside’. Though even having that doesn’t mean that everything will run smoothly.

When a warning arrives that their counting house, which can hold up to $20M, is the target of an upcoming robbery, it encourages DSS employees (and brothers) Eric (Terence Donovan) and Brian Jackson (Bryan Brown) to speed up their plans for a robbery that has been in their minds for many years.

In what slowly unfurls into a chain of events involving more and more people, Eric (who works for security at the firm) tries to move suspicion onto a new starter…who himself has been partnered with an old hand and an ex-cop.

To give any more away would be to spoil the surprises that come while watching this great Australian crime/action/thriller.

The acting is superb across the entire cast, and it reminded me in tone of when I first watched The Sweeney movie at an age where I shouldn’t really have!

Money Movers is dark, gritty, and oozes so much testosterone that I swear my facial hair grew 2 inches while while watching it.

The Australian climate adds to the sweaty nervousness of all involved in this spiderweb plot to try and steal the money, with each turn in its twisting narrative usually ending up in a violent scene that will have you gripping the armrests of your couch.

Written and directed by Bruce Beresford (from a novel by Devon Minchin) the tension is palpable throughout its entire running time.

Money Movers is an engrossing and fulfilling heist movie that probably passed many people by, and I thank Umbrella Entertainment for releasing it and giving more people the opportunity to get in on the action.