Review: From Bedrooms to Billions 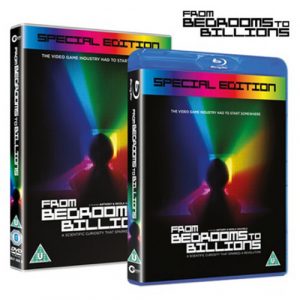 ‘From Bedrooms to Billions‘ is a masterpiece! I appreciate that this is a strange way to start a review but in all honesty I thought why not just get to the point and let you know what I really think. I also appreciate that I can’t just write I love this film over and over again, so let me tell you why I think ‘From Bedrooms to Billions’ is so amazing.

I have been playing video games for over 35 years. Video games have and will always be a massive part of my life. My love for them runs deep and it seems obvious to me that the makers of ‘From Bedrooms to Billions’; Anthony and Nicola Caulfield, feel the same way.

‘From Bedrooms to Billions’ tells the story of the humble beginnings of the video game industry and how influential Britain was in making video games the biggest entertainment business in the world.   The film focusses heavily on the bedroom programmers who took, for the time, cutting edge technology, such as the Sinclair ZX80 and ZX81 and created games for their own amusement. The film really manages to capture the feeling that they were literally pioneers creating magic on a TV screen. I remember my dad even having a go at programming on our ZX Spectrum 48k+ and making a game of noughts and crosses. The lines of code he typed to make that game work must have taken him forever. As you can imagine, Sinclair Spectrum, BBC Micro, Commodore 64, all feature heavily, but also the 16 bit era such as Amiga, Atari ST and the introduction of Sega, Nintendo and PlayStation.

The story is told by programmers, publishers, musicians, journalists and generally speaking legends of the video game world. Imagine, Ocean, Hewson, Ultimate, Gremlin Graphics, U.S.Gold and so many more publishers discuss the trials and tribulations of making games. Magazines like Crash, ZZAP!64, and Your Sinclair also feature. There really is so much content in the documentary it’s difficult to mention every single thing.

‘From Bedrooms to Billions’ also explores the early microfairs as there was literally nowhere else to buy computer games back in the early 80s. I remember two of the happiest weeks of my life were when I did work experience at Software City in Wolverhampton. Prior to the work experience, I spent my Saturday mornings in this shop just looking at all of the games on the shelves and there I was advising customers of the latest games and what to buy. You can imagine how excited I felt? I then spent a week in the office amongst the mail order stock surrounded by boxes and boxes of games. I was in heaven!

Not everything in ‘From Bedrooms to Billions’ is told through rose tinted spectacles, as it features some of the programmers who had trouble coping with the fame and fortune that was suddenly thrust upon them. It also tells of the downfall of some of the leading publishers at the time and how they struggled to adapt to the harsh reality of the changing market.

Anthony and Nicola Caulfield have painstakingly crafted a wonderful documentary. I can’t remember the last time I felt such a range of emotions whilst watching a film. Nostalgia, happiness, fondness for a simpler time in my life when imagination, pure joy and excitement of playing computer games meant something special all came flooding back. The fact I recall my dad typing code and working in a game shop is all down to watching ‘From Bedrooms to Billions’. I can say with all honesty that I have a lump in my throat when the credits roll. It’s corny to say, but I feel like I’ve been on such an emotional ride I just don’t want it to end.

The Blu-ray version of ‘From Bedrooms to Billions’ is packed with extras. They are all excellent and give you more interviews about how some of the greatest games of all time were made. There is also a superb audio commentary featuring Anthony and Nicola Caulfield, Jeff Minter, Archer MacLean and Shahid Ahmad where they discuss the film and reminisce about their experiences in the games industry.

You can buy ‘From Bedrooms to Billions’ (and much more) from Funstock.

I love video games and movies as much as I love my children. However, I'd rather face off against the worst end of level boss, and watch the scariest horror movie than visit another soft play! Thanks for taking the time to visit the website and read this review. Please send any complaints to Dave and any money to me!
Interview with Anthony and Nicola Caulfield Review: The Nightcomers