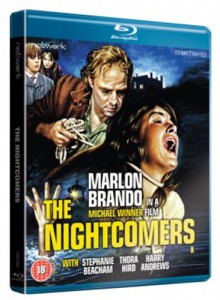 In a stately manor somewhere in England lives a governess; Miss Jessel (Stephanie Beacham), and her charges Miles and Flora, aided by the housekeeper (Thora Hird) and the handyman Peter Quint (Marlon Brando).

Most horror fans will be familiar with the erotically charged predecessor of this film ‘The Innocents’, based on Henry James‘ ‘Turn of the Screw’. This film made ten year later by Michael Winner is an ‘origin story’ that takes place before ‘The Innocents’ giving us the backstory of the haunted children and repressed dead governess.

I suppose I see a film like ‘The Nightcomers’ as a poor man’s Alfred Hitchcock and it does have that certain ‘seedy britishness’ that only Winner does. However, I have to admit to being rather surprised by this film. The story itself is pretty straightforward, the kids parents are dead and they’re being cared for by a rich relative (Harry Andrews) who packs them off to the countryside and forgets about them. They’re cared for by the bossy housekeeper and the apparently sexually repressed governess. The children spend all their time with Peter Quint (Brando), who does his best ‘oirish’ accent, and his loose, realistic style of acting just seems odd within the constraints of this film. The children are suitably creepy and VERY annoying. The girl is supposed to be about 10 and looks about 25, while the boy isn’t a patch on Martin Stephens’ amazing turn in ‘The Innocents’. They do manage to make the viewer quite unsettled and believably twisted. Brando may be too old for the part, he’s certainly too American. The shine out performance here is definitely Thora Hird’s bossy yet concerned housekeeper.

Surprisingly ‘Last Tango in Paris’ was made AFTER this film. I thought perhaps Winner had approached Brando for this film knowing the sexual content. Here’s the surprise; the graphic bondage/sex scene between Brando and Beacham. Her; hogtied and him unbuckling his trousers as he kneels behind her really did make me raise an eyebrow. During their sexual encounters Miles watches, and then makes Flora (who looks old enough to be his mum) re-enact them. The story ends in tragedy, but doesn’t match the storyline of ‘The Innocents’ which is a little strange.

However, the picture is beautiful and I know Network aren’t big on extras but I would have loved to seen a documentary about the making of. A bit of a curiosity really, not scary like ‘The Innocents’, or sensual, but rather a quiet horrific depiction of an unwilling S&M relationship and the affect it has on the children who witness the power struggle. As British Horror’s go, this is a worthy addition to the staple and is uncomfortable viewing due to its ‘children imitating adults’ theme.

Review by Tina from a disc kindly supplied by Network On Air.

I used to live in Los Angeles and write about Rock bands. Now I live in wonderful Wales and write about films. I like video games (especially RDR2) and am also a painter...gratuitous plug: follow my art account on Instagram @artbytinar
Review: From Bedrooms to Billions Review: Play Dirty