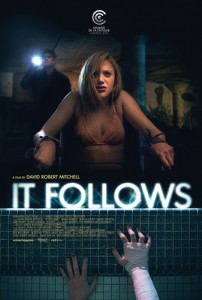 Jay (Maika Monroe) tells her sister and friends (Keir Gilchrist and Olivier Luccardi) she’s met a new man, and after a seemingly ordinary sexual experience with her new boyfriend, events take an unusual and horrific turn.

Sex and death, the last girl, punishment for being sexually active, all the old familiars make an appearance in ‘It Follows‘. The beginning of the films is a throwback to a 70’s slasher, it looks like the same neighbourhood Michael Myers lived on, only this is worn, old, a bit shabby. A postmodern slasher setting for the new generation of tweeny horror fans. But this is no tweeny horror remake, but rather a new and fresh horror, with an in-depth feel for its characters.

The look of the film is almost languid, muted colours, static shots that don’t move away from what’s happening. Imagine a Giallo with a script that makes sense, directed by Sophia Coppola. It pauses, looks at the scenery, takes in all nature around it, despite this is doesn’t feel grounded in the real world, but rather it immerses us in a fever dream, where that thing under the bed is real and it won’t stop until its snapped your legs off.

This is a film about teens, the camera never leaves them, all other adults are depicted in shadow, blurred, in mirrored reflections, there are no grown up’s to save them, they are on their own. This works perfectly, the problem before Jay and her friends is all that matters, it’s all they, and we, can see.

After sleeping with her boyfriend for the first time, Jay is ‘informed’ in a brutal way that she will be ‘followed’ and so she is. At first no one believes her, leaving her to think she’s perhaps hallucinating.
Slasher horror is well known for its ‘You fuck, you die’ mentality, one could almost accuse past filmmakers of being prudish, punishing the sexually active with an axe through the head. This doesn’t stray far from that premise, only now the horror lingers, there’s no instant ‘punishment’ but an all-encompassing journey into an inescapable sexually active hell. Let that be a warning kids.

We’ve been lucky with some of the recent horrors out there, ‘What We Do in the Shadows’ and ‘The Babadook’ have raised the bar and underlined that horror fans aren’t just tweeny squeakers, ‘It Follows’ gives us some good young actors playing almost believable roles, helpless and terrified. The scares themselves come at you 100 MPH, and I jumped and pushed myself back into my seat a few times.

One of the main stand outs is the soundtrack, like a cross between ‘Berberian Sound Studio‘ and ‘Drive‘, as though written and performed by John Carpenter – It’s obtrusive but fits perfectly, it’s not annoying and adds to the terror of the film.

We don’t do stars, but I’d give this a 5 out of 5. I just HOPE they DON’T make a Part 2, The Beginning. A truly creepy, crawly horror that will stay with you.

Seriously, I’ll be looking under the bed tonight.

I used to live in Los Angeles and write about Rock bands. Now I live in wonderful Wales and write about films. I like video games (especially RDR2) and am also a painter...gratuitous plug: follow my art account on Instagram @artbytinar
Review: Everly Preview: MLB Manager 2015