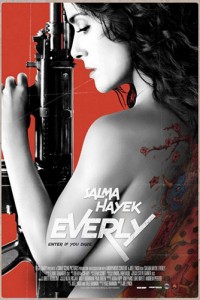 Exploitation, grindhouse, popcorn cinema. Call it what you will, I call it VITAL. As I write this, thousands of hungry movie fans are hopefully flocking to cinemas across America (and soon maybe the UK?)   To see director Joe Lynch’s ‘Everly‘. Starring the beautiful and seemingly frozen in her 20’s Salma Hayek, who at 48 has proved that action stars get better with time and in a world where female action stars are as rare as rocking horse shit; in ‘Everly’ she shreds the screen with high energy and pathos in abundance.

The film opens midway through some off screen horror, suddenly a naked Hayek fly’s through a door bloodied and in terror, she must now defend herself as Everly is under constant siege for the best part of the films 92 minute running time. After betraying and running from her Yakuza pimp boyfriend, a bounty is put on her head and she must take on wave after wave of crazed call girls, yakuza heavy’s and nightmarish sadists. With a video game feel to the action and obvious nods to Takashi Miike films, Joe Lynch may have just made one of the best underground films of 2015 so far.

Joe Lynch is one of the new wave of American horror film makers, along with stalwart Adam Green (‘Hatchet‘ trilogy, ‘Digging Up the Marrow‘) and Adam Wingard (‘You’re Next‘) Lynch started working with Troma and moved into directing rock videos before getting a big break with ‘Wrong Turn 2‘ which was a standout throwback horror. With ‘Everly’ Lynch has hit his stride big time, and uses only one location and all set over one night, a favourite device of mine in such films as ‘Enemy Territory‘. There are buckets of blood, but not to excess, and random appearances by various colourful characters who have come to slay our hero; most barely get a few seconds screen time before they are shot in the face or melted with acid!

The big anchor to the cartoon carnage is Hayek’s performance. We haven’t managed to see the best of her action chops since probably ‘Desperado‘, but strong performances since in ‘Frida‘ and ‘Savages‘ have kept her top of the pile. Some would say ‘Everly’ is another throwaway exploitation film but I LOVE THESE FILMS! Hayek’s hardened Everly is as memorable as Pam Grier’s ‘Coffy’ as she oozes sex appeal while wielding a combat shotgun and displays feline strength as she defends her mother and child who become involved in her nightmare.

The Takashi Miike influence is obviously in the yakuza element but also in the high body count. My favourite scene where we meet ‘The Sadist’ (who not only uses vials of acid to torture victims but also carts around his own human attack dog) is pure Japanese cinema but made by a razor sharp young American filmmaker. Kudos also to the writer Yale Hannon and Lynch for not having Hayek nude or even scantily clad for the film, it would have been easy to titillate with Everly but the film is far more respectful to the story in that respect.

I highly recommend EVERLY to fans of grindhouse/exploitation cinema and especially to fans of Salma Hayek. Joe Lynch is definitely one I’ll follow to whatever he does next.

Review by Ramrod (co-host of ’60 Minutes With’)

Review: The Story of the Sinclair ZX Spectrum in Pixels Volume 1 Review: It Follows