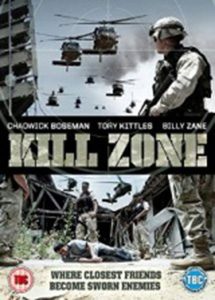 Lt. Samuel Drake (Chadwick Boseman) is a veteran of the Iraq war whose past memories and actions still haunt and have repercussions on him today as he tries to maintain steady employment as a taxi driver. After being submitted to a steady stream of self centred comments and opinions from a variety of passengers (ranging from drunk to just thoroughly unpleasant) he seeks help from his spiralling mental state by attending counselling sessions for military veterans which are led by Marshall (Billy Zane, playing the role very understated).

To compound on his already fragile mental stability, Drake is contacted by military contractors who need rogue soldier Sgt. Devon Carter (Tory Kittles) killed, as he was witness to a military operation gone badly wrong in which Drake was a part of.

Will Drake kill Carter? Will Marshall ‘cure’ Drake? Will Carter escape to tell his story? Will you care by the end of the movie?

The above synopsis could well be the setup to a non-stop, blood soaked, gun toting, testosterone fuelled action movie, especially when you factor in the title; KILL ZONE. However, what you get is a low budget character piece charting the highs and lows (admittedly it’s mostly lows) of returning war veterans and the mental baggage that they have to carry with them.

It’s low budget roots are evident, but overall the direction and cinematography are not too harsh on the eyes, and the acting never falls to levels where you think you’re watching a school play. Billy Zane is ALWAYS watchable and Samuel Drake does a decent enough job with the material that he is given.

My main gripe with the movie is the music score (sorry Jason Wells) as I found it to be too loud and overbearing…and extremely monotonous. Maybe the monotony was intentional and was meant to reflect the day to day existence of Drake and Carter? Either way, I found myself turning the volume down on more than one occasion.

If you can leave your expectations of an action movie at the menu screen and are in the mood for a more considered look at the life of a war veteran (plus be quick on the volume button now and again), then Kill Zone could well be a movie to pass your evening. It does at times drag on just a little too long and even at a 92 minute running time would benefit from losing a few minutes here and there.

It may or may not be to your taste, but once again kudos to 101 Films for releasing a movie that would probably otherwise have passed you by.