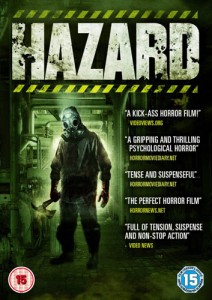 The hidden camera show ‘Scary Antics’ is fighting against dropping viewing figures, which means that host and creator of the show ‘scary’ Dave (Todd Bruno) has a disgruntled crew on his hands. Setting up the latest show at a supposedly haunted chemical factory, the pressure is on to produce an episode that will keep the show on air. Little do they know that this episode will be the wildest that they’ve ever filmed.

Before I go any further I should point out that back in the halcyon days of VHS I used to devour low budget horror movies by the likes of Fred Olen Ray, Jim Wynorski, David DeCoteau, etc. Movies where the acting was questionable, the sets either wobbled when touched or if it was a real world location were just set in the one place to minimise production costs and the make-up effects (while still better than CGI in my opinion) varied between ‘almost believable’ and ‘laughable’. I’m saying this because your propensity for low budget horror movies will definitely influence the enjoyment that you get from Hazard.

Set entirely inside the aforementioned chemical factory, a group of friends want to set-up Jacob (Norbert Velez) whose Father died at the chemical factory and who insists on boring his friends with tales of how it is an evil place. Everything naturally goes wrong once they are inside and with the place boarded up with no escape, it becomes a deadly game of cat and mouse for who can survive.

I’ll give no plot spoilers and leave it up to yourselves to figure out who lives or dies, or indeed if the factory really is evil. All I’ll say is that my predictions were way off the mark.

Written, produced and directed by Lou Simon (the 2nd of 5 movies where she has the triumvirate of those credits), Hazard could well lose the casual viewer in the first 30 minutes of its short 80 minute running time. Poor acting, boring characters, flat direction and a storyline that’s been covered numerous times definitely makes for something that could have people reaching for the off button.

However, once the premise had been set, the characters were locked inside the factory and the proverbial shit began to hit the fan, I found myself warming much more towards the events on screen. The practical effects ranged from not too bad (axe in the eye) to so bad I was laughing and rewinding to see it again (severed head). I had no emotional connection with any of the characters and didn’t particularly care who lived or died, but the situations they got into and the (mainly stupid) ways in which they dealt with their predicament kept me entertained for the remainder of the running time.

I can see why I’d probably be in the minority of people that would quite enjoy Hazard (and it’s current IMDB score of 4.0 bears this out) but if you are like minded and can get past that first 30 minutes, then there’s definitely some enjoyment to be had from it.