Review: Man About The House 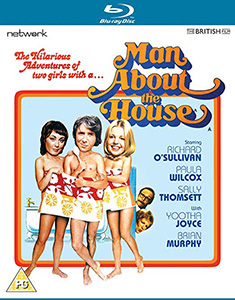 Another 1970’s movie adaptation of a British television comedy, Man About The House features the exploits of flatmates Robin (Richard O’Sullivan), Chrissy (Paula Wilcox) and Jo (Sally Thomsett), as they try to save the street they are living in from being demolished by shady property dealers.

Landlords George (Brian Murphy) and Mildred (Youth Joyce) have opposing views on this, as they seem to do on everything that comes into discussion between them. Mildred is happy to spurn the developers cash advances, while George is happy for anything to make some quick money.

The TV series ran from 1973 – 76 and spurned 2 spinoff shows: Robin’s Nest (where Robin gets married and opens a bistro), and George and Mildred (where they move into the suburbs).

The movie not only has the main characters from the TV series returning to play their parts, but also has other minor cast members reprising their roles too.

Man About the House enthusiasts may pick up on little details being different to the TV series, such as the layout of the flatmates room and the position of the Ropers room in the building, but other than these minor changes, this is essentially an extended episode of the successful comedy series.

The final 15 minutes of the movie are quite self-referential, with the whole gang arriving at the Thames Television Studios (where the TV series was filmed) and meeting the real-life actors from other TV shows, while George gets them confused with their on-screen personas, leading to an awkward conversation with Jack Smethurst and Rudolph. There is also a short, yet utterly crazy, meeting with Spike Milligan at his TV dressing room which takes the humour into typical ‘Milliganesque’ territory.

Having grown up watching these TV shows during the 70’s, I’m always happy to rewatch them and their big screen versions too.

I’m not sure if the humour will translate as much to todays generation brought up on quick-fire Netflix and YouTube comedy, but at the very least, for those of us old enough to remember flares being in fashion, big shirt collars, and political correctness being an unknown thing, there are plenty of laughs to be found here.

The blu-ray transfer makes it look like it was made yesterday too.

You can buy Man About the House by clicking HERE. ALL money raised by purchasing from Amazon via our website is given back to our listeners and followers in upcoming competition prizes. The more people buy, the bigger our prizes.

Review by Dave (host of 60 Minutes With) from a disc kindly supplied by Network on Air via Blue Dolphin PR.