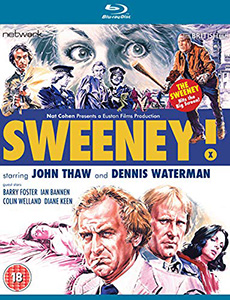 During January 1974, Britain would grind to a standstill on Wednesday nights because a new cop show had begun on ITV. Way before the fluffy cardigan of Starsky, without the wry charm of Jim Rockford and none of the wetness of Macmillan and Wife, ITV had taken a sprinkling of The Streets Of San Francisco and abandoned our own steadfast Dixon of Dock Green and Z Cars to give us something more… realistic.

It told the story of London’s The Flying Squad (also known as the Robbery Squad, Specialist Crime Directorate 7 and SCD7, and nicknamed ‘The Sweeney’). A branch of the Serious and Organised Crime Command within London’s Metropolitan Police Service. It’s purpose to investigate commercial armed and unarmed robberies. A hard hitting show about ‘real’ men, men who could beat the crap out of the bad guy, shag his wife and still make it down the pub before closing time.

The Sweeney reigned from 1974 -78 and hailed as a revision and revitalisation of the British television crime drama. Created by Ian Kennedy Martin, and produced by Euston Films (the film arm of Thames Television), the series focused on the Flying Squad and shocked and thrilled audiences with its realistic depiction of police and criminal brutality and violence.

Known for its action sequences, extensive location filming, claims to realism, and often brutal portrayal of its central characters, The Sweeney broke away from programmes such as the aforementioned Dixon of Dock Green (1955-76) and Z-Cars (1962-78), and paved the way for later, more ‘edgy’ productions such as The Professionals, Life on Mars and the recent Bulletproof.

Its success was such that there was a two-year gap between the third and fourth series while the team made two full-length feature films (Sweeney! and Sweeney 2) to cash-in on the show’s popularity.

Sweeney! follow’s DI Regan and DS Carter as they became involved in the death of prostitutes and soon all leads to point to a political scandal. A member of the British government, Charles Baker (Ian Bannen), is about to secure a huge deal with OPEC, but he’s being unknowingly controlled by his urbane, manipulative American press secretary Elliot McQueen (a very creepy Barry Foster).

Regan investigates the mysterious death of a prostitute (Lynda Bellingham) as a favour to one of his informants, he becomes aware that Baker and McQueen might be involved. More killings follow and Regan ends up in bed with the main government good time girl, Bianca Hamilton (Diane Keen). Regan takes on both the criminals, his bosses AND the British security services when McQueen gets away with running prostitutes and murder. 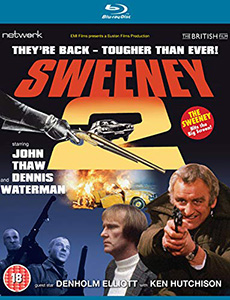 Sweeney 2  concentrates on a group of particularly violent armed robbers, who are robbing  banks all over London, but weirdly only take  £60,000 from each job, leaving behind any amount over that. They kill anyone who gets in their way, even abandoning members of their own gang if they are injured. Ken Hutchinson as the leader of the gang has a gold plated sawn off shotgun which he fondles a lot. The whole gang along with wives and kids live in a sort of commune in Malta, where it becomes apparent that they only rob when they need to build or repair the pool at the complex they’ve built.

I was interested to see these two releases from Network on Air (and they do look amazing, crisp and all the glorious colours of the 1970s zing off the screen) mainly because in 1974 I was 9 and wasn’t allowed to see the Sweeney (9pm was bed time). The main reason is that old tome of the film reviewer; that films invariably reflect the time in which they’re made, and this week has been a doozy for 60 Minutes With, along with the Sweeney films we’ve also had TILL DEATH US DO PART (a very weird film) and MAN ABOUT THE HOUSE.

“SHUT IT!”
“Get yer trousers on, you’re nicked”
“If you weren’t who you are, I’d kick your arse up to your shoulderblades”

It’s a slice of British life long gone and where some films can make you cringe, this is something else. This is a real piece of cinema history and should be seriously respected as such.

Times change and The Sweeney fell out of fashion and the show ended. Perhaps  in this post-feminist age, and the culture of #MeToo it’s time to look at films such as Sweeney! to see just how attitudes to woman HAVE changed and perhaps how performance and masculinity has changed in 40 years.

I would have loved to have seen some extras on these two releases; documentaries (The BFI 40th anniversary talk) , perhaps a chat with Dennis Waterman and some insight into the amazing locations used. But all in all an unmissable double bill for British cinema and Sweeney fans.

You can buy Sweeney! by clicking HERE, and Sweeney 2 by clicking HERE. ALL money raised by purchasing from Amazon via our website is given back to our listeners and followers in upcoming competition prizes. The more people buy, the bigger our prizes.

Review by Tina (co-host of 60 Minutes With) from discs kindly supplied by Network on Air via Blue Dolphin PR.

I used to live in Los Angeles and write about Rock bands. Now I live in wonderful Wales and write about films. I like video games (especially RDR2) and am also a painter...gratuitous plug: follow my art account on Instagram @artbytinar
Review: Man About The House Review: Plugg