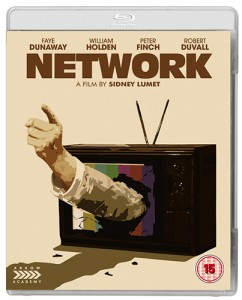 “I’m going to kill myself on live TV” says Peter Finch’s strung out news anchor as he slumps on the bar.

“We can call it suicide of the week! The Death Hour” is the nonchalant comeback from William Holden’s news commissioner. The tone is set for Sidney Lumet’s classic satire on a television generation gone mad on its own lust for money and ratings. Made in 1976 in the midst of a revolution in American cinema, Network comes to us now courtesy of Arrow Films on Blu-ray.

Anyone unaware of Network is in for a real treat as Arrow has released an excellent version of this very important film.

Starring William Holden, Peter Finch, Fay Dunaway, Robert Duvall and Ned Beatty, Network is a classic of 70’s cinema and way ahead of its time in turning a satirical eye towards the overwhelming control on the public by television and the corporate control of what we see.

Peter Finch plays Howard Beale; a man on the verge of a nervous breakdown after a long career as a news anchor. Reporting the everyday misery has ground him down to the point of self destruction and he declares that a week from now he will commit suicide live on air. His long time friend Max (William Holden) is heartbroken and wants to protect his friend. Elsewhere Fay Dunaway’s Head of programming; Diana, sees an opportunity for an exploitative TV show surrounding Howard’s hysteria. Ratings are very low and the network is in horrendous debt, ruled by the iron fist of Robert Duvall’s Max Schumacher. Howard is thrown back into the spotlight as a ‘later day prophet’ ranting about the state of the country and urging the public, in Network’s most famous moment, “Go to the window, open it, stick your head out and yell; I’M AS MAD AS HELL AND IM NOT GONNA TAKE IT ANYMORE!” As ratings soar, people’s lives start to simultaneously unravel as quickly as Howard’s mind. The view of post-Watergate, post-Vietnam America needing an anger outlet is as relevant now as it was back in 1976. How we are controlled through media, from how we vote, to what to eat and what car to drive, like Oliver Stone showed us, albeit more graphically in ‘Natural Born Killers’ also in David Fincher’s masterpiece ‘Fight Club’.

Made nearly 40 years ago and still as vital as ever, Network is a brilliantly written tapestry of different themes, from the prophetic view of media controlling public opinion, to William Holden’s side story of a middle aged man chasing a dangerous affair with Fay Dunaway’s emotionless ‘Alpha female’ and how the public will watch anything; the more harrowing the story the higher the ratings will go.

The performances in Network are among some of the finest ever committed to film. Fay Dunaway is outstanding in her balls to the wall portrayal of a dominant woman in a man’s world. William Holden as a man struggling to keep up with the fast moving pace of modern times, Duvall, in muscular form commands the screen and Peter Finch, in what was to be his final role is tragic and explosive. Ned Beatty and Beatrice Straight cameo in the film and each nearly steal the picture with small but hugely impactful monologues.

The influence and importance of Network is not as appreciated as maybe it should be. This film laid the groundwork for many modern films and fuelled a new generation of raging prophets like Chuck Palahniuk, Bill Hicks and Charlie Brooker. It was a critical and public success however and was nominated for 10 Oscars, winning 4 for acting and screenwriting. Unfortunately tragedy followed the film as Peter Finch, nominated for best actor, sadly died shortly after the film’s release. He was posthumously awarded the academy award for his work in Network. Gone but never forgotten.

Arrow Films have gifted Network with a beautiful 1080p anamorphic HD transfer. The definition is excellent with rich colours and very little grain. The film will never look better.

The HD PCM Mono soundtrack is functional; for a very ‘talky’ film you don’t have a lot to complain about here. Speech is crystal clear.

Special features included in this package.

If you have never seen, or God forbid even HEARD of Network, treat yourselves to Arrow’s superb Blu-ray. Another magnificent release of an equally magnificent film.

Review by Ramrod (co-host of 60 Minutes With) from a disc kindly supplied by Arrow Films.