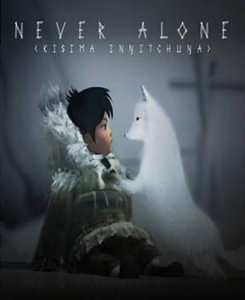 Video-games are often accused of a lot of things. They are too violent, sexist, misogynistic and in some cases just plain stupid. Now don’t get me wrong, I enjoy shooting people in the face as much as the next guy, and there’s something entertainingly wrong about picking up a prostitute in Grand Theft Auto, having sex, robbing and killing her then dumping the body. Yes, I realise this paints a horrible picture of me and gamers in general, but then a game like Never Alone comes along and makes you realise that gaming can be so much more.

In Never Alone (Kisima Ingitchuna) you play a young Iñupiat girl who is drawn away from her village to investigate a strange blizzard which is threatening their very existence. Soon after the game starts you meet an Arctic fox which joins you in your quest.

Never Alone can be played in single player or local coop. It is a side scrolling platformer which as a genre is quite common place these days, but Never Alone is certainly one of the best because it tells a very unique story. In single player you can switch between the girl and fox by the press of a button. This works very well for anyone worrying about playing the game on your own. They both have unique abilities needing each other to overcome the various obstacles they face. For example, the fox can jump higher and scramble up walls. He can also use the spirits of the environment to help the girl. The girl has a bolo which can be used to destroy objects and she can also move heavy blocks. As you’d expect with this type of game there are various puzzles which generally speaking aren’t very taxing.

Graphically the game is lovely with the environments looking very nice indeed. The girl and fox are also beautifully animated. Upper One Games really have managed to make you feel like you are in a harsh environment with the howling wind stopping you in your tracks or driving your forward. The sound and music is also excellent and evokes a sense of feeling and empathy for the characters and place.

What sets this game apart from other side scrolling platformers on the market is the story and how it is told. The developers have worked in collaboration with Alaskan Native Elders to create a deeply personal story. Throughout the game you unlock interviews with people who live in the Alaskan community, which provide an insight into their way of life and culture. These interviews are absolutely fascinating and you feel like you’re being educated whilst being entertained.

In gameplay terms, Never Alone feels like Limbo as there are instant deaths and some trial and error involved with the platforming. This can be frustrating but it never gets in the way of the story or makes you feel like giving up. The AI character can also do strange things now and then which can cause you to die. The game is a little buggy at times and your character can fall through walls on occasions. However, none of these issues were enough to detract away from a fantastic experience.

Thematically, Never Alone shares common traits with the excellent Valiant Hearts: The Great War, Papo and Yo and Brothers: A Tale of Two Sons. Whilst the gameplay and graphics may not be extremely polished, the touching story keeps you interested and you want to unlock more and more interviews giving you an insight into the culture and way of life of the Iñupiaq. In terms of gameplay length Never Alone shares similarities with the aforementioned games, in as much as they can be completed in one sitting. Personally I didn’t want to put the game down once I started it.

Despite some frustrating gameplay mechanics, Never Alone is a superb experience and one I would highly recommend people try.

Available on PS4, Xbox One, PC & coming soon to WiiU.

I love video games and movies as much as I love my children. However, I'd rather face off against the worst end of level boss, and watch the scariest horror movie than visit another soft play! Thanks for taking the time to visit the website and read this review. Please send any complaints to Dave and any money to me!
Review: Futureworld Review: Network