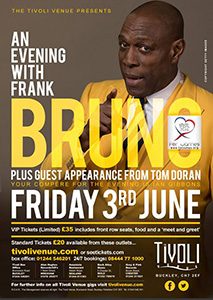 I’ve documented my long history with The Tivoli many times during various reviews I’ve written on gigs there, but in all my years of frequenting this great venue, this was the first time that I’d ever been to ‘An Evening With’ event there, and what a fantastic guest they had with Frank Bruno.

During the 80’s and 90’s I went to many boxing matches, the majority of which were at the M.E.N. Arena (as it was called back then) in Manchester. Steve Collins, “Prince Naseem” Hamed, Chris Eubank, Nigel Benn and many more all plied their trade in front of my excited eyes, but it was always Frank Bruno that I wanted to see. Little did I know that I’d eventually get to meet the big man face to face and listen to his great stories.

I’ve ranted in the past on both 60 Minutes With and 80’s Picture House about the price of ‘meet and greet’ packages; $1,500 to meet KISS, $2,500 to meet Twisted Sister, so I was VERY pleased when the limited number V.I.P. ticket prices were announced for Frank Bruno; £35. This not only guaranteed you a meet and greet with Frank, it also got you seats at the front of the stage AND an indian meal from the great people at Country Spice before the event began. Superb value for money.

After filling my belly (I had chicken madras if you must know, and very tasty it was too) and washing it down with a cold lager (the essential drink when eating curry) it was then time for the meet and greet. We all queued and went upstairs to see Frank in 3’s. I met Lynne and Barry from Radio Deeside and the 3 of us went up together. Frank was extremely jovial and chatty with everyone, posing for photos and signing memorabilia while all the time engaging in conversation with everyone. I shook hands with him and was instantly amazed at the size of his hands. I swear that he could have enveloped my head with them! 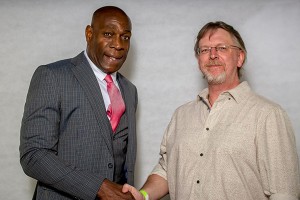 After a short chat, a photo and getting his autograph, we made our way back downstairs for part 1 of what was to be a 2 part session with him. Hosted by Ian Gibbons from Radio Deeside, Frank began to tell us stories ranging from his youth right through to the present. No subject was out of bounds (he talked about his depression and being bi-polar) and many a time he kept going off on funny tangents about stories which had the audience in stitches. His keen sense of humour was always at the fore; Ian: ‘Have you always been big Frank?‘ Frank (with a wink and a smile): ‘I’ve always been big in one particular place‘…then goes on to point out that he’s currently looking for a girlfriend. It was also the day that news had broken that Muhammed Ali had been taken into hospital and Frank voiced his love of the man and hoped that he would make a speedy recovery. Unfortunately we all awoke the next morning to the news that he had passed away.

An intermission followed where there was a raffle and an auction of sports related memorabilia. Proceeds went to Tandem Cymru and ‘For James‘ (James Bulger’s mum was in attendance too).

Part 2 continued the entertaining stories before being rounded off with a Q&A session with the audience. I got to ask him if he had any dressing room pre-fight rituals, to which he replied that he hadn’t and that they were something that could start to mess with your head if you allowed them too and that he was more than happy just to have a drink of water before a fight.

This was a fantastic evening at the Tivoli and I have my fingers crossed that this is just the beginning of more ‘Evening With’ events there. Once again, another superb night out in Buckley, North Wales.

Review: 5 Dolls for an August Moon Spotlight on: Event Horizon