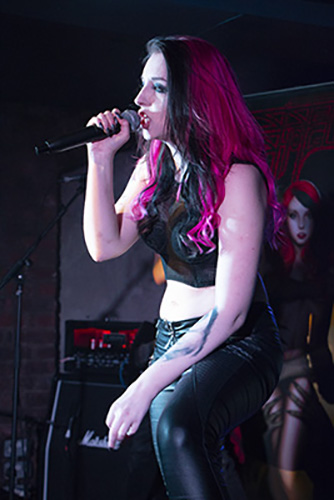 Falling in the middle of a Bank Holiday weekend, there were certainly a lot of events going on to capture peoples attention; Ed Sheeran playing just up the road at the Etihad Stadium, Manchesters great football rivals Liverpool playing in a Champions League final where the local populace were packing out sports bar to cheer on the opposition, plus one of the hottest weekends of the year to tempt people outside.

However, we at 60 Minutes With knew the place to be on Saturday May 26th: at ‘The Factory’ to watch Janet Gardner and support band Sister Shotgun.

After having been chatting with the band just a couple of hours previously, I was really looking forward to seeing Sister Shotgun ‘in action’ onstage for the first time. I certainly wasn’t disappointed.

An 8 song set flew by in an explosion of energy, passion and fun. This is a band who enjoys being onstage, and it shows. See the photo below as a prime example! 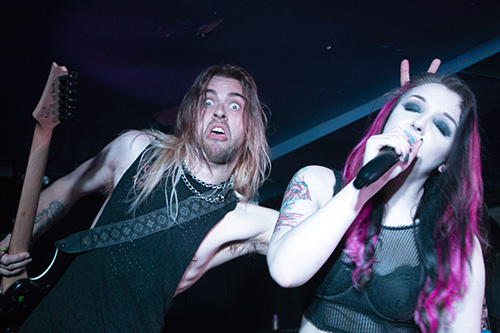 Despite me only knowing 1 song (set closer ‘Silhouettes’…for the full story on that, I once more point you to the interview show) each song had me hooked from beginning to end. Chloe’s vocals are soaring and powerful, yet always keeping a melodic tone that draws you deeper into each song.

The band are musically tight and have a stage presence that keeps you transfixed throughout the whole show, with each member playing their part to keep you visually and aurally entertained throughout the set.

With a new album in the works, Sister Shotgun are definitely a band to keep an eye (and both ears) on. We here at 60MW Towers will certainly be closely following what they are doing and keeping you all informed. 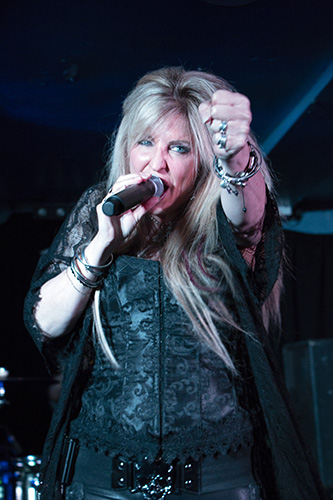 After having chatted with Janet Gardner last month (another gratuitous plug for one of the aforementioned interview shows) it was fantastic to finally meet both her and Justin James. The previous time that I had seen Janet in concert was 7th September 1990 (also in Manchester!) when Vixen were on their ‘Rev it Up’ tour. Was it really 28 years ago!?

It was a pleasure to see the band complete their soundcheck, and every member of the band (and this goes for Sister Shotgun too) were extremely friendly and personable. Both before and after the gig, no fan was left wanting a photo, autograph or chat. Despite the well worn saying of ‘never meet your heroes’, it is always an absolute pleasure when I do get to meet them and they go above and beyond to make you feel welcome.

Janet has appeared on stages worldwide, and her experience and professionalism shows through in bucketloads.

She commands the stage with her presence and her voice has matured into a powerhouse vocal perforce that is even better than when I last saw her in 1990.

It is not only the musical chemistry between herself and Justin James that is evident on stage. The physical and mental mutual adoration between them shines through too, and it was an absolute joy to see the smiles and looks to each other during the songs. 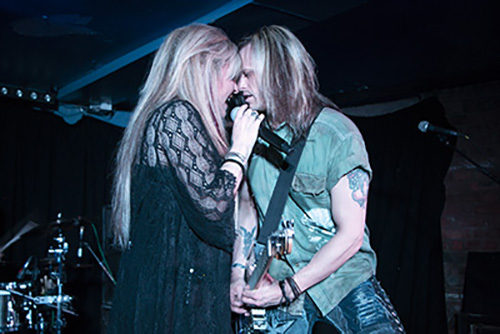 Janet’s latest album has been played here many times, and the songs certainly lend themselves to great live performances too. I was overjoyed when Janet announced that they were going to play ‘Let It Be Over’ (my favourite song from the album) and Janet’s passionate introduction lent it even more gravitas…as did her introduction to ‘Candle’; a song about the death of her parents, which obviously still hits hard.

A band with this much experience and passion makes for one hell of a live show, and the energy didn’t drop from the opening note until last.

Regular visitors to our website and listeners of the show will know that I’m a huge KISS fan, so I’ll leave it to your imagination as what my reaction was when they suddenly burst into Love Gun!

A 28 year gap has been far too long seeing Janet back onstage, and I have fingers and toes crossed that she will be back again before too long. Her and Justin have crafted a fantastic album (which you should all go and buy immediately) and I’m already waiting for another to be released by them…accompanied by another UK visit too please…how about a trip to North Wales and a gig at our favourite venue ‘The Tvoli‘!?