Nobody expects…all 45 episodes restored and uncut! But Network have used their chief weapons of surprise, ruthless restoration efficiency and a fanatical devotion to Monty Python to bring you this exclusive Limited Edition 50th Anniversary Blu-ray box set of Monty Python’s Flying Circus available for the first time worldwide – including special and rare content!

Sketches, some cut after initial broadcast, some excised completely, others edited to make more palatable have been carefully restored to their intended length. The majority of Terry Gilliam’s animations have been newly scanned in high-definition and restored to a specification way beyond their original format. Hitherto unseen outtakes, film inserts, and studio recordings have been retrieved, adding yet another dimension to this exclusive release. This is the ultimate television restoration and a must for every generation of Python fans.

Tim Beddows, MD of Network Distributing, is “thrilled that we’ve been given the opportunity to restore Monty Python’s Flying Circus. It’s long overdue and the results our award-winning team have yielded from the original materials are just staggering. One of the best restorations I’ve ever seen.”

From the funniest, most deadly joke in the world to an ex-parrot, Hell’s Grannies to singing lumberjacks – this is television lunacy at its most silly!

So don your Silly Walk and head over to reserve your copy now…or you’ll be voted Twit of the Year!

All four series will be available to purchase separately at a later date beginning with a special Blu-ray DigiPack of Series One (also on DVD) on 7th October.

In addition to the Network’s limited edition release, and subsequent individual series releases, further 50th anniversary happenings will include a season at the BFI Southbank with screenings of films and series from and influenced by the troupe, a takeover at the BBC, Michael Palin’s exec. produced programmes for BBC Radio 4, and a Guinness World Record attempt for the ‘Largest Gathering of People Dressed as Gumbys.’

After nearly a decade of research and planning, this is a ground up restoration by Network’s award-winning in-house team working from the best available materials – from first generation 2-inch videotape masters to surviving negative and print film material, scanned in 2K. The wildly varying picture sources have been graded scene-by-scene and intensively cleaned up. 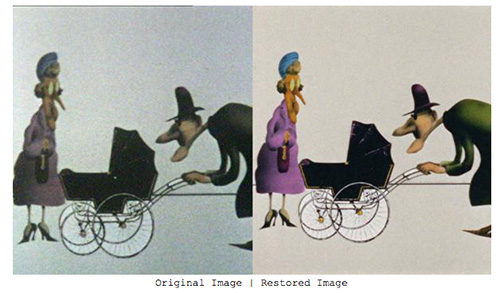 State of the art upscaling of SD videotape has been deployed with careful use of noise reduction for both video and film grain, resulting in a vastly improved viewing experience all round on Blu-ray HD format, far exceeding anything previously available.

Network’s Archive Colourist Jonathan Wood has said “The Monty Python series restoration is a huge jigsaw puzzle but one that is slotting together as well as the original sketches did. Hard work but satisfying for all the team.”

Please see below video for a sneak-peak look behind the restoration work.