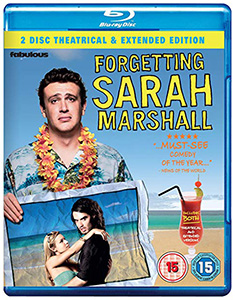 Pete (Jason Segel) and Sarah are seemingly Hollywood’s cutest B-list couple. During a messy break-up, Sarah reveals that she is involved with another man. In the throws of an intense post-break-up depression, Pete decides to get away to the Hawaiian resort that he and Sarah always talked about getting away to. Just as he’s about to check in, who should appear, but dun-dun-dun Sarah Marshall is there with her new squeeze, rock star, Aldous Snow (Russell Brand). Now, with the help of an attractive young receptionist and DEFINITLEY NOT LOVE INTEREST, Pete must go on a journey to learn the best ways of -ahem- Forgetting Sarah Marshall.

Since Dave gave me four Judd Apatow films to review this week, this one’s going to be a short one; this proved to be quite a tedious experience but sparsely littered with some genuinely funny jokes.

Out of the four films provided, this is the only one I’d not seen before. This didn’t curb the intense feeling of deja-vu that I had actually seen this one a million times before in every other mid 2000’s cookie-cutter adult romcom. But, as I said, it’s genuinely funny when it occasionally wants to be, if only for the dialogue filler and not much else.

The crux of the film’s problems is that the actual filmmaking, or rather the adaptation of the script, proves to be so uninspired and even seemingly unfinished. Dialogue has this weird and stilted feel to it and there seems to be no point of lift-off for the story. It’s so sloppy in parts that it kind of feels like I’m watching a rough cut, and that they are still intending to add the flare later.

The fact however that the funny stuff could shine through this though is proof to how funny some of the dialogue can be. Even if said comedy isn’t the most ground-breaking.

Not much to say on this one really. Forgetting Sarah Marshall is a bland, uninspired and tedious film, with only a few brilliant scenes and jokes here and there to see you through. It proves to be a shame because the stuff that is funny has a tendency to be really funny.

At best I’d say put this on a list of romcoms to watch on rainy days with your significant other.

I like to think I'm a critic out of spite for all the criticism I receive in film school. I enjoy consuming all things entertainment and art but I enjoy pretending I could do any better even more. Jokes aside, I absolutely adore creating and interacting with all art and entertainment. Always happy to air my obnoxious opinions on games, films and music and I can only hope you also get some kind of sick kick out of reading them.
‘And now for something completely…restored’ – Its…Monty Python’s Flying Circus Norwegian Blu-ray Edition Review: Get Him To The Greek