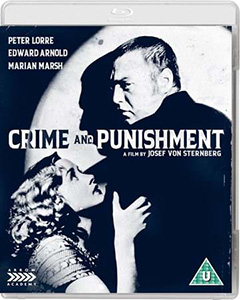 Directed by the infamous Josef von Sternberg (The Blue Angel) and adapted by Joseph Anthony and S.K. Lauren from Fyodor Dostoevsky’s novel of the same title, Crime and Punishment was more or less a vanity project for Peter Lorre who starred in the  lead role of Raskolnikov (here named Roderick instead of Rodion). Von Sternberg, who was contractually obliged to make the film, disliked it, and despite it’s ‘classic of cinema’ status, I can see why.

In 1930’s Russia, university student Raskolnikov graduates with honours and even though he is hailed as an authority on crime he lives in abject poverty. When he finds out his family is coming to visit, he is forced to find money from somewhere, so decides to pawn the watch his proud father gave him for his graduation.

At the (evil woman) pawnbroker’s, he meets a young beautiful prostitute Sonya, and ends up giving her the money he makes from the watch.

His mother and sister arrive, and shocked at the squalor he lives in, he finds out that Toni, his sister, lost her job because her employer’s husband, Grilov, tried to force himself on her.

They are now poverty striken, so Toni has agreed to marry her new boss, the pompous Lushin.

Angry at Toni for selling herself to Lushin, and desperately in need of money, Raskolnikov returns to the pawnbroker and kills her to steal whatever he can.

Disturbed by people outside the door, he escapes, only to be arrested the next day, not for the pawnbroker’s murder but for overdue rent.

Inspector Porfiry is eager to meet this criminal expert, and on and on it goes.

Perhaps I wasn’t in the mood for a hardcore 1935 film based on a story by a man who spent most of his life, pondering life in a gulag in Siberia, but I felt that the film hadn’t stood the test of time.

Lorre was in full overacting mode, as were most of the cast, and the story itself was one of those poverty/prostitution tales where you’re not allowed to show the poverty OR prostitution. Every meeting between the Inspector and Raskolnikov was overlong and wordy to the point of boredom.

Raskolnikov’s redemption at the end (through the love of a good prostitute and the power of Christ) was…expected.

I normally lap up old movies, this wasn’t one of them.

I used to live in Los Angeles and write about Rock bands. Now I live in wonderful Wales and write about films. I like video games (especially RDR2) and am also a painter...gratuitous plug: follow my art account on Instagram @artbytinar
Review: Funny People ‘And now for something completely…restored’ – Its…Monty Python’s Flying Circus Norwegian Blu-ray Edition

RT @DastardlyJabby @ApeMutterings and I record our next @60MWPodcast Spotlight Reflection show this week about BMX Bandits. Send us your thoughts and memories to be included in the show pic.twitter.com/qlPjK5sEm6

In Ep364 (online tmrw) I chat with @RichSuttonActor about 'The Terror'. The Terror is out now on Blu-ray & DVD. While you wait, take some time to visit the @OnceUponAQuara1 website that he created along with Garry Cooper & Harriet Vyner: onceuponaquarantine.com/about@AimPublicity pic.twitter.com/dDwtexmP8w

Awsome achievement by @DastardlyJabby You'll hear all the "night before" chat in the upcoming March/April Entertainment Show. twitter.com/DastardlyJabby…