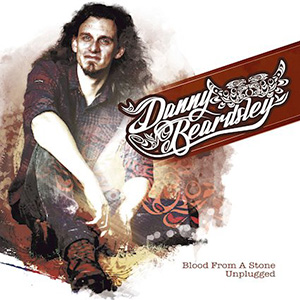 “An assured set of complex yet accessible material. A strong vocal with a hint of Cornell” – Classic Rock Magazine.

DANNY BEARDSLEY continues his ascent with an acoustic reworking of his debut album, Blood From A Stone. Danny has just released a new single, Wilt Away (see below) and Blood From A Stone Unplugged, will land on Friday 17th July, through all major platforms.

Coming at you from the Midlands, DANNY BEARDSLEY has often been described as one of the most instinctive and formidable guitarists around. Danny is founder and member of instrumental progressive trio, The Parallax Method. With appearances at some of the most prestigious festivals including Download, Bloodstock, UK Tech Fest, Hammerfest, HRH Prog, HRH Road Trip to Ibiza, Rock and Blues Festival, Camden Rocks, and Macmillan Fest. Danny’s musical endeavours have harvested support from the likes of Classic Rock Magazine, Scuzz TV, Powerplay Magazine, Prog Magazine, Kerrang, Metal Hammer, Planet Rock and Total Guitar. Ranking in MusicRadar’s 2019 poll as one of the top 10 new guitarists in the world, he is also an official ambassador for Orange Amps and a PRS Guitars supported artist.

DANNY BEARDSLEY originally released his debut album, Blood From A Stone, last September. The release was widely praised and revered throughout the nation’s media. Never one to sit on his hands, Danny decided to re-work the tracks as an unplugged album: “What started as the re-recording of one song acoustically ending up being the whole album. When I originally wrote the songs, I wrote them acoustically before deciding to develop them into a full band structure. Losing a rhythm section meant the acoustic guitars had to cover all the bases and primarily the focus shifted to the vocals. That was the most challenging part, as I consider myself a guitar player who sings. Unplugged music has nowhere to hide, technical guitar playing evolves into a more streamline approach which helped remind me that the song is paramount.”

With a sophomore album already in the works, DANNY BEARDSLEY’s reputation will undoubtably continue to soar.