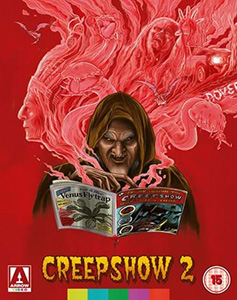 George A. Romero and Stephen King are back together in the sequel to 1982’s Creepshow, and once again deliver a chilling trilogy of tales.

“Old Chief Wood’nhead” has obnoxious youths being stalked by a wooden adversary,“The Raft” places 4 teens in the middle of a lake on the titular raft, only to discover that they are not alone, and it all ends with “The Hitch-hiker”, where a businesswoman pays the price for not driving with due care and attention.

All 3 stories are told with the same EC comic book style that was so popular in the first movie, accompanied by an animated sequence which unfolds between the different stories and ties everything together.

Much like the original Creepshow the stories are tongue in cheek and are not too horrific, though it definitely earns its 15 rating at times as flesh is melted, bodies rot, and the body count keeps ticking upwards as people are killed.

Stephen King makes his obligatory cameo appearance, this time as a truck driver, and the rest of the cast is scattered with other recognisable names: Tom Savini, George Kennedy, Dorothy Lamour.

Creepshow 2 is an enjoyable horror romp, though while not as instantly enjoyable as its predecessor, is still fun to watch after multiple viewings.

This Limited Edition Blu-ray is packed with superb extras that make it worth picking up for those alone, with an interesting commentary by director Michael Gornick being just the start of a journey that will have you learning so much more about the whole process of putting this sequel together.