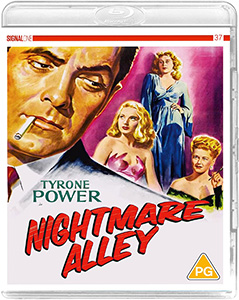 With the release of the new Guillermo del Toro helmed version of the movie currently in the cinema, now is the perfect time to buy the original on blu-ray and acquaint yourself with the characters of Stanton Carlisle, Zeena Krunbein, Dr Lilith Ritter, Molly, et al.

Stanton (Tyrone Power) gains employment at a travelling carnival and soon sees an opportunity to further his career and make some big money. It is however an unforeseen tragic incident that becomes the catalyst of his journey to greatness, while also signalling his ultimate demise too.

Nightmare Alley is a powerful movie, lingering long in the memory once the end credits have finished rolling. A twisting and thoughtful narrative is brought to life by superb performances by all involved, and directed wonderfully by Edmund Goulding.

Atmospheric and with a sinister undertone running throughout, you’re constantly left wondering when something will go wrong, as opposed to if something will go wrong. The characters displaying a multitude of emotions as tragedy and success go hand in hand as friendships are both made and broken due to the circumstances placed before them.

The ultimate tale of “be careful what you wish for“, Nightmare Alley is a worthy addition to anyones movie collection, especially in this new blu-ray release by Signal One Entertainment.

Review by Dave from a disc kindly supplied by Signal One Entertainment.