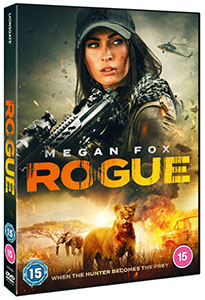 Megan Fox (Transformers franchise) fights to the death against terrorists and a dangerous, rogue lion in this white-knuckle action thrill-ride from director M.J. Bassett (Deathwatch, Silent Hill: Revelation, Ash vs. Evil Dead).
Battle-hardened mercenary Samantha O’Hara (Megan Fox) leads an elite squad of soldiers on a daring mission to rescue a hostage from a group of violent terrorists in the plains of Africa. But when the mission goes wrong, the team is stranded, Samantha’s squad must face a bloody, brutal encounter with the ferocious gang of rebels, and a ravenous, enraged lioness that is baying for their blood after escaping from an illegal lion farm.
With explosive set-pieces and a horde of rampaging wild animals, former wildlife photography M.J.  Basset (now best known for her work in action and horror) delivers a killer slice of action cinema, with a shrewd critique of poaching and the black-market animal trade.
Starring Megan Fox, Philip Winchester (Law and Order: Special Victims Unit), Sisanda Henna, Adam Deacon (Kidulthood), Jessica Sutton (Escape Room), Kenneth Fok (The Dark Tower), and Calli Taylor (The Courier). Written and directed by M.J. Bassett.
Special features

Iconic Eye Release ‘Back From Behind The Sun’ EP and single