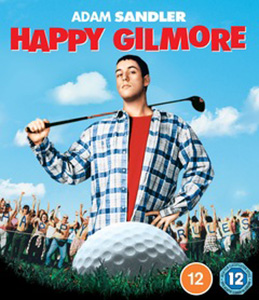 Happy Gilmore (Adam Sandler) wants to be an ice hockey player but…he can’t skate and his temper tends to ruin any chance he has of being successful either in sport and love.

After his girlfriend leaves him, he finds out his granny owes a shit ton of money to the IRS and has to move into a home where a sadistic Ben Stiller works. Happy has to find $270,000 so granny can repurchase the home that her husband built.

Happy finds out he can knock a golf ball 400 yards with a hockey based slapshot-style swing, and soon meets Chubbs Peterson (Carl Weathers), a golf club professional and former golf star who lost his right hand after an alligator attack. Chubbs convinces Gilmore to enter a local tournament to earn a spot on the Pro Golf Tour with team mate Shooter MacGavin (Chris MacDonald) who hates him.

Now I’m biased towards this film because I spent many hours watching Happy Gilmore with my son as he was growing up, which was completely inappropriate as Sandler’s humour is juvenile, cross, unhinged and sweary. You know, the sort were Sandler will grab anything dick-like and stick it between his legs. That’s probably why we both loved it. Also, nothing is more magnificent than an angry Adam Sandler and in this he is VERY cross, and it’s hilarious.

Having said that I do think Sandler is a bit marmite, you either love him or hate him there’s no inbetween, and this is very ‘American’ comedy. As bizarre as it sounds the story is reminiscent of a 30s era screwball comedy but with swearing and violence.

Full marks off me.

I used to live in Los Angeles and write about Rock bands. Now I live in wonderful Wales and write about films. I like video games (especially RDR2) and am also a painter...gratuitous plug: follow my art account on Instagram @artbytinar
Review: Air Missions: Hind Lionsgate UK presents Megan Fox in Rogue on Digital Download 9 November and DVD 16 November