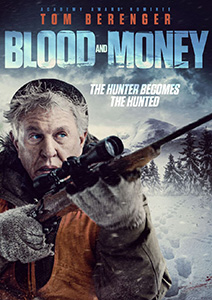 Quite early on it’s revealed that Berenger’s character Jim Reed is ill, and possibly dying as he coughs blood up and passes out. He seems to amble about aimlessly, trudging through the snow and occasionally going into town to pick up his medication. There he becomes friendly with a waitress, Debbie,  and through a series of events we see the hopelessness of her life. Jim seems to identify with her dilemma as he’s a retired Marine whose family fell apart long ago when he killed his daughter in a drunk-driving accident. On visiting an AA meeting he meets Debbie’s husband and realises that their stories are similar.

Jim continues his search for a buck in the huge and unpopulated snowy land  and is shocked when he shoots what he thinks is this elusive buck and instead finds instead  a young woman dying on the ground. She manages to tell him “you’re a fucking dead man” before dying. He panics and doesn’t connect the dots between her, the news report he’s just watched about a bank robbery  and the black duffel bag at her side. He flees the scene and after a solid introduction to Jim and his life, the action amps up.

This has that Coen brothers feel to it because of the snow, and is one of the coldest looking films I’ve ever seen, the snow and slow crunching footsteps of all the characters make the feel of ‘ice’ palpable. And interestingly, Jim is a very unlikeable character, all he seems to utter is ‘FUCK’ and ‘SHIT’, he’s grumpy and kills without any feelings. He’s literally dead inside, which is weird because in stories like this you tend to root for the guy being chased by the baddies, but the fact is, Jim… is a baddie too.

I shall say no more and let you discover the rest for yourself.

Great to see Berenger back in a film that has a satisfying end too!

Blood and Money is on Digital HD 16 October and DVD 19 October from Signature Entertainment.

Review by Tina from an online screening link kindly supplied by Signature Entertainment via Wirchfinder PR.

I used to live in Los Angeles and write about Rock bands. Now I live in wonderful Wales and write about films. I like video games (especially RDR2) and am also a painter...gratuitous plug: follow my art account on Instagram @artbytinar
Lionsgate UK presents Megan Fox in Rogue on Digital Download 9 November and DVD 16 November Review: Along the Edge