I’ve been a fan of Danny Vaughn since first hearing him with Waysted back in the 1980’s, and it’s been a pleasure following him since then across all of his different projects.

Myself and Thom recorded an interview show with Danny for our podcast 80’s Picturehouse back in 2014 (this will be available once again as part of our ‘remastered’ interviews here at 60MW, so keep listening) and of course I got to chat with him about his latest solo album ‘Myth’s, Legends & Lies’ in a recent Soundcheck interview episode.

It is in support of this album that Danny is touring with an acoustic show, just him, his guitar, and his fantastic vocals. I’ve said it before and I’ll say it again…Danny must have a painting hidden of himself somewhere, as neither his looks nor his voice have aged!

Sitting centre stage at our beloved Tivoli in Buckley, North Wales, Danny captivated those in attendance for over 2 hours.

With a body of work that covers hundreds of songs, it was an absolute pleasure to hear that over half of the songs on Myth’s, Legends & Lies was played. Stripped of the eclectic mix of piano, organ, violin, mandolin and the many more instruments used on that album, Danny gave each of the songs a new raw emotion with just his guitar and the passion in his voice.

New single ‘The Shadow of King John’ got things of to a great start, with the North Wales crowd already familiar with the song and singing along.

’Deep Water’ was my favourite of the evening. A personal highlight on the new album, this acoustic version stripped it right down to the core, and Danny’s vocals were absolutely superb, giving me goosebumps and a huge smile at the same time.

The epic ‘Seven Bells’ lost none of its heart and soul, while ‘Monkey’s With Money and Guns’ still retained all of its tongue in cheek swagger.

There were of course older songs to accompany those from Myth’s, Legends & Lies, with Tyketto favourite ‘Forever Young’ getting the crowd singing as loud as they could.

In between songs Danny gave anecdotes about his life, as well as interesting snippets of information about the songs. One particularly interesting story was about a couple of lines in ‘The Shadow of King John’…tennis racquets will never be the same now!

One of the great things about this tour is that Danny is mixing up the songs at each venue, never even sure himself which ones he will play until that night. This makes it especially appealing for fans that want to go to multiple shows, as you will be getting a different experience each time.

I also have to mention what an absolute gentleman Danny is in real life too. Always friendly and approachable in the past when sorting out and recording the previous interview shows with him, myself and Thom were privileged to get into the Tivoli early (thanks Roki) to watch Danny do his soundcheck before the gig. As soon as he’d finished, Danny walked up to us both and we all had a great chat together…thanks Danny.

Devoid of a fancy light show, other musicians, and any kind of pyro, Danny shows that great songs, accompanied by his acoustic guitar and wonderful voice, are all you need to captivate an audience and take them on musical journeys that will forever stay in the memory.

Try and catch Danny on tour, and also make sure to support him by buying his music too. Myth’s, Legends & Lies is hopefully just the beginning of a new musical chapter in the life of Danny Vaughn. 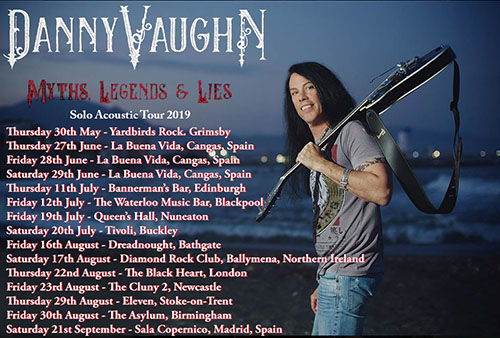 Review by Dave with thanks as always to Roki and Kirsty.