Never having been to ‘For The Love of Sci-Fi’ before, things took a turn for the worse for me a week before the event due to personal circumstances and ill health. Despite already having booked my ‘Rocky 4’ photoshoot with Carl Weathers and Brigette Nielsen, it was touch and go if I could attend or not.

Thankfully I did and it was the perfect antidote to all the bad stuff that was happening. Taking my mind out of the real world and into a space of cinematic wonder where cast members of E.T. were back together, Lou Ferrigno stood aside a 7ft Hulk, the aforementioned Carl and Brigette fist bumped and hugged everyone, and I even saw Blade (my favourite of all the cosplayers there that day) battle Darth Vader (Spencer Wilding) in front of a tie-fighter while stormtroopers watched on! Now where else can you say that you’ve seen that!? 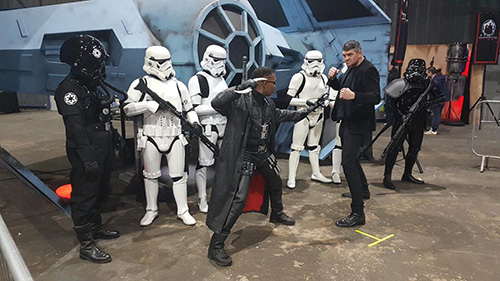 The Bowlers Exhibition Centre is located on an industrial estate just outside of The Trafford centre, so there is ample parking for everyone even if you don’t manage to get a space at the venue.

Once inside it is spacious enough to fit everything in comfortably, including a queuing system for photographs and autographs that worked very well. In fact I’ve never been to an event where the photo’s were ready so quickly for you…and expertly taken and printed too.

There are of course refreshment areas for those that need them, which also spills into an outside area with food and drink stalls along with a small fair for the kids.

Trader stands are scattered throughout and there is also a section with retro video game consoles hooked up to televisions for some old school gaming action.

Cosplayers are seen aplenty as you walk around the venue, and some have sets built to have photos taken too…all for a small donation to charity if you so desire. The photos below don’t do justice to the magnificent Ghostbusters set that was there…there was a library with Slimer and the librarian next to it as well! 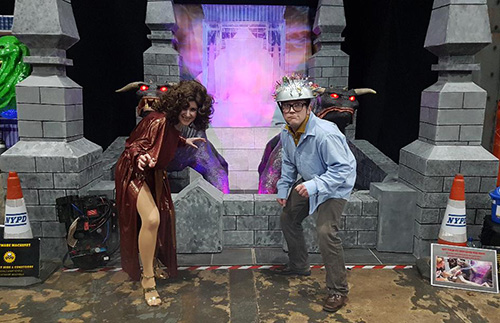 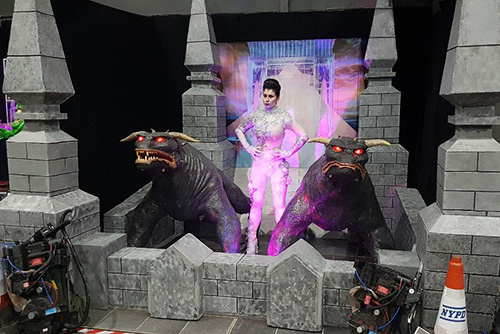 As you wander around the huge hall you never know what is around the corner. I watched people doing fantastic paintings, saw an incredible 3D scanner where you could have models made of yourself, and then watched as Nick Maley unpacked Yoda, hooked him up to the the animatronic gubbins, and then had him moving around while telling amazing stories of working with practical effects. 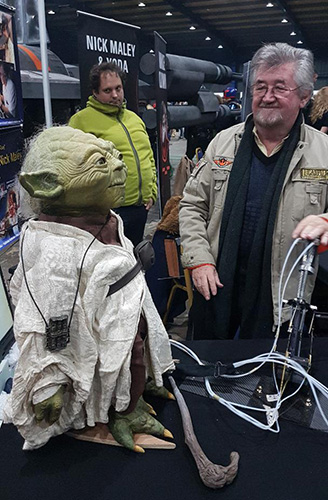 The theatre section not only hosted a variety of informative and entertaining Q&A sessions with the guests (Jesse Ventura was a delight to listen to as he held back about nothing at all), but also had an opening night concert on the Friday evening where Ray Parker Jr did a set (obviously including the iconic Ghostbusters theme) and Gaten Matarazzo (of Stranger Things fame) did some songs with his band.

I was delighted to watch the Piccadilly Symphony Orchestra perform film scores, and when the 1st notes of the Star Wars theme was played while 2 stormtroopers took their place stage centre, you could feel the goosebumps appear on everyone.

It is of course the guests that are the main draw to events such as these, and even though Bill Duke sadly couldn’t make it, there was enough cinematic celebrities in the building to keep everyone more than happy.

Stranger Things, E.T., Predator, Rocky 4, The Hulk and much more was represented.

I was personally thrilled to meet Dee Wallace, as The Howling has long been a favourite horror movie of mine. Fingers crossed to get an interview show with her as she was everything I always hoped she would be…and more.

Star of the show for me though was Brigette Nielsen. I watched her throughout the day (not in a creepy stalker kind of way I must add) and it was an absolute joy to see how she interacted with every person that she met. Hugs, smiles, kisses, always having time to spend those valuable few minutes with everyone that will live in their memories forever.

I was lucky enough to meet her twice; once for the photoshoot with Carl Weathers (who was awesome too it must be said) and then again at her signing table where she signed the photo that was taken earlier. 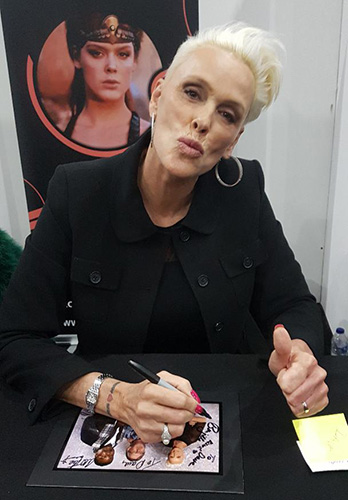 Her warm smile instantly greeted you, and as she threw out her arms and gave me another of those awesome hugs of hers, I told her that she was the loveliest person there and it was a pleasure seeing how she was giving everyone she met her utmost attention. Her reply; “That’s very nice of you to say and that’s what I’m here for, I love meeting everyone“.

There are already rumours of her return to Manchester and she is definitely on my bucketlist of interview guests for our podcast. Fingers crossed!

For The Love of Sci-Fi is billed as “By the fans, for the fans“, and it certainly kept this fan very happy indeed.

I hope this is just the beginning of us covering this event for many more years to come.