Review: Elvira: Mistress of the Dark 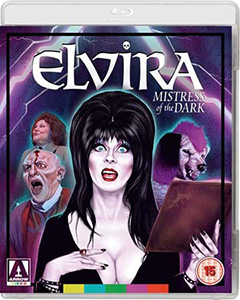 Imagine a time – say 1988, where girls were girls and boys were boys, and there was no such thing as calling your friend a non-binary ‘they’. Imagine a time when it was okay to make risqué jokes about boobs, or even…oral sex. Imagine a time, post Benny Hill, when a woman could spout double entendres, be camp, silly, sexy, funny AND stand up for herself. Sounds like a dream doesn’t it?

Cassandra Peterson created the character of Elvira in 1980 and started out in Los Angeles presenting ‘Elvira’s Horror Macarbre’; a show where she scathingly introduced gems of 50’s horror and B movie classics. Her ‘cult’ ahem…grew and next stop was Hollywood, much like the films story.

This is such a mainstream all American story (with some witchcraft), but instead of the protagonist being a virginal, white, good, religious, hard working girl. We have Elvira: a Fenella Fielding lookalike, self-effacing, unusual, sexual, and funny. It’s Elvira’s dream to play Vegas (doing what God only knows) and to do that she must  invest $50000 in the show. She is broke and her dreams are shattered, until she receives a letter informing her that her great Aunt Morgana has passed away and she must attend the reading of the will. Could this be the answer?

She gets into her Black T-bird (complete with KICK-ASS number plate) and heads for the most conservative, small, American town that is straight out of Footloose. Yep – there are a lot of nods to other films in this (Flashdance, Carrie).

Elvira, who all the local boys want to fuck and all the girls want to be, inherits a poodle, a house and ‘recipe’ book off her dead aunt, which of course is a magic book, and her evil uncle (W. Morgan Sheppard) Vinny (so called because originally Vincent price was going to play this part), wants it and he will do anything to get it.

I admit to absolutely loving Elvira: Mistress of the Dark. I know in this day and age it would be seen as sexist and somewhat misogynistic, but it was made in a time when it was a joy to see a beautiful sassy woman twirl nipple tassels as a finale to the story.

It still IS a joy, and despite Elvira’s boobs being front and centre, it’s gentle comedy, it’s not all out rude, in fact it’s rather endearing, much like Carry On Screaming, and Peterson is delectable and delightful, genuinely self-effacing and funny. All the acting is over the top and hammy and perfect for the story and film.

Will Elvira make it to Vegas? Well, you’ll have to buy it and see!

Of course this is an Arrow release which makes the included  extras amazing, including a really great new, making of where the actors moan quite a bit about goo.

Elvira: Mistress of the Dark will be released on 10th December 2018 and you can buy it buy clicking HERE. ALL money raised by purchasing from Amazon via our website is given back to our listeners and followers in upcoming competition prizes. The more people buy, the bigger our prizes.

Review by Tina (co-host of 60 Minutes With) from a disc kindly supplied by Fetch Publicity from Arrow Films.

I used to live in Los Angeles and write about Rock bands. Now I live in wonderful Wales and write about films. I like video games (especially RDR2) and am also a painter...gratuitous plug: follow my art account on Instagram @artbytinar
Live Event: For The Love of Sci-Fi, BEC Manchester, Dec 1st – 2nd, 2018 Eric Gales announces new album