Has it really been a year since I first attended For The Love Of Sci-Fi !?

Not only was it my first FTLOS event, it was also the first time I’d attended something run by Monopoly Events, and in the subsequent 12 months it has been an absolute joy to not only attend many more of their great events, but to also watch them continue to get bigger and even better. Kudos to everyone at Monopoly Events for all of the hard work and dedication.

This years FTLOS was its 5th iteration and once again it was a packed 2 days with plenty of guests to see/have photos with/get autographs/watch Q&A’s with. As well as set builds and prop builds for those extra special photos of the occasion. The ED-209 from Robocop and the Power Loader from Aliens were fantastic…as was the Star Wars room which was full of all different things from across the Star Wars canon for you to take photos with.

The traders hall was once again an absolute joy to walk around, and the force was strong in this one as it magically lured cash from my wallet on numerous times.

One of the things that really stood out for me this year in the traders hall was the added amount of stalls selling handcrafted things, rather than the usual gamut of Pop Vinyls and and mass market trinkets that you see at a lot of other events. 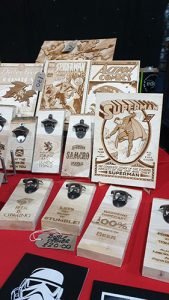 We partook of some especially fine Gin from ‘Fallen Angel’ (and bought some too…highly recommended), and their Rum is exquisite too…that’s next times treat at an event they attend. Fascinating stories too of how the bottles and the drinks were made.

I of course had to buy some more amazing hot sauces from Dean of the Dead…his Exsaucist sauce is to die for (pun intended)…as are them all! He’s a thoroughly nice guy too, so stop and have a chat with him when you see him at an event.

Beautiful artwork on cushions, prints and t-shirts from Evil Eye Art always tempt us…our couch is a showcase of Pete’s amazing skills as we proudly show off the cushions he painted to everyone who visits 60MW Towers. 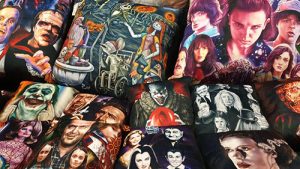 Neil Vickers (Creator Worx) was once again selling his incredible sculptures, of which the 2 larger ones of Talos and Robocop had me transfixed for ages. The detail he puts into all of his sculpts is amazing.

There was also Scream Camp who I definitely want to get involved with soon…I think I’d better take a few pairs of clean underpants though, as their events look like you may well need them! 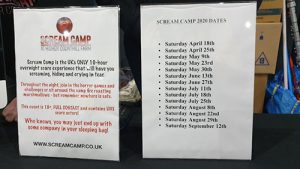 Then of course there are the guests, which we’ve praised Monopoly Events many times for on our podcasts for the variation of people that they get. How can you go wrong with an event starring Dolph Lundgren, Peter Weller, Brian Blessed, Warwick Davis, John Bernthal, Karl Urban, Charlie Heaton, Danny Glover, Sam Jones, Ray Park, Al Leong and more!? 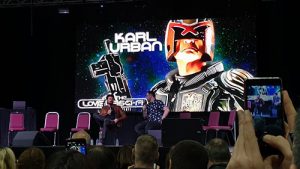 It was an absolute pleasure to watch the premiere of Star Wars: Origins. This goes on YouTube on Thursday December 12th and is well worth looking out for. We also hope to have an interview with Writer/Director Phil Hawkins in the New Year. 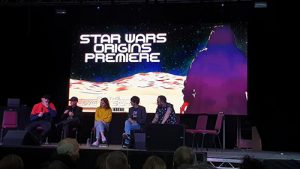 The organisation was, as always, incredibly professional. Photo ops were taken care of with minimum fuss and the photos were ready and waiting for you almost immediately.

It was clear where to go for autographs and the Q&A sessions are always a constant series of highlights across the days.

Once again Monopoly Events knock it out of the park with another superbly run event which was loved by everyone attending.

It may all be over for 2019, but keep a close eye on Monopoly Events and everything that they already have incoming for 2020…it’s going to be one hell of a year!

Review by Dave, with thanks to Monopoly Events for the press access.