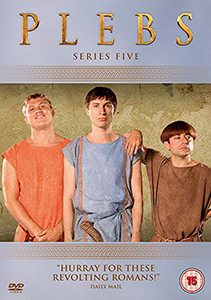 Last year Tina reviewed the series 1-4 boxset of Plebs, so it was great to sit down again and follow the continuing adventures of Marcus, Grumio and Jason as they invariably cause havoc in ancient Rome.

Series 5 sees some new characters once again being introduced, among them is Amanda Holden as Rufina…a lusty woman who wants a slice of Jason (who thankfully isn’t as annoying as in his debut series…we still miss Stylax though).

The ‘Crown and Toga’ pub is still going strong…and still smelly…especially when a load of hooligans invade the place, and it was great to once again see the ‘Landlord’ (“Alright Landlord“…yes, we’re still saying it!) as well as ‘Landlady’ Maureen Lipman…though it is now difficult to get her Coronation Street character out of our heads too!

Marcus still makes plans that go awry, Jason still sees himself as a playboy, and the wonderful Grumio is still as gloriously silly as ever…especially when inventing the ‘Grumbrella”! But even though a lot of the tropes are still the same, there are enough new adventures and new faces to keep things fresh and the laughs coming on a regular basis.

An always funny blooper reel is a special feature, but it is the 8 individual episodes that will keep you coming back time after time for more Roman adventures with the boys that seemingly never grow up.

Series 5 is also available in a new Series 1-5 boxset.