After visiting (and absolutely loving) the Monopoly Events ‘For The Love of Sci-Fi’ convention last year (see review), I was looking forward to attending their Liverpool Comic Con, especially as Burt Young was attending and I could add to my ‘Rocky’ photo collection with him after meeting Brigitte Nielsen and Carl Weathers at the aforementioned ‘For The Love of Sci-Fi’.

There is far more though to the Liverpool Comic Con than meeting the guest visitors: cosplay events, video games, movie props and sets, Q&A sessions, battling robots, escape rooms, a plethora of stalls selling everything movie/TV/video game/comic book related that you could think of (and items that you’d never have thought existed!) are just some of the things to keep you enthralled and excited during your stay at this great event. 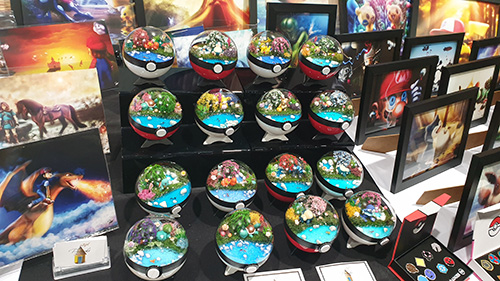 Walking past all of the stalls and being amazed at the variety of stuff for sale can easily take up an entire morning…and empty your wallet too, as it’s not just about quantity, there’s a hell of a lot of excellent quality stuff for sale singing out “buy me” as you walk past. Rocky and Rambo memorabilia of course called out the loudest to me, but I was intrigued and amazed by things like Poké Ball terrariums, original artwork of celebrities (and yourself if you wanted) made into the shape of a jellybean, a stall selling an incredible array of swords and knives from movies and games, retro video game consoles and cartridges, and much, much more.

The stalls are just one part of a large arena filled with things to see and do. Want to have your photo taken next to the A-Team van, or the DeLorean from Back to the Future, or K.I.T.T. from Knight Rider? How about next to the ‘Trotter’s Independent Trading’ Reliant Robin from ‘Only Fools and Horses’? You can even have Boycie (John Challis) stand with you next to it. 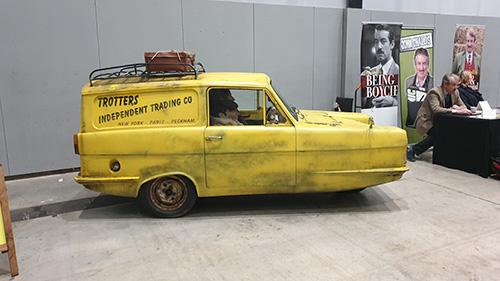 How about some retro video gaming while you wait for your next photo shoot with one of the guests? Or something a bit more high-tech and a ride on a 9D VR cinema rig? There is so much to see and do that the incredible array of guests attending the event are the icing on a very large and tasty cake. 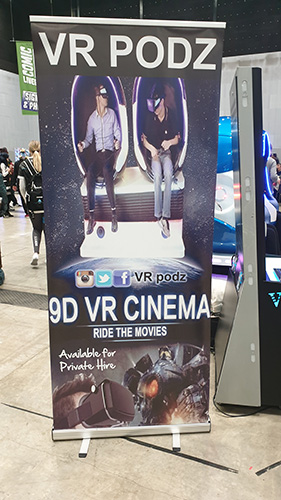 As mentioned earlier I was absolutely thrilled when it was announced that Burt Young was making his only UK appearance, and what an absolute gentleman he is.

Though the time may be short during a photoshoot (especially as demand for photo’s with him was high), he made a point of greeting you like an old friend and was more than happy to pose however you wanted with him.

He was also incredibly generous with his time when you met him at his signing booth too. I got my photo with him signed (thank you again Monopoly Events for giving us Rocky fans another photo to add to our collection…can I request some Rambo guests next please?) and he was genuinely touched when I gave him a portrait of him to take back to America drawn by our very own Tina. He perused it for many minutes with a smile on his face while saying how wonderful it was. Thank you for those precious minutes with you Burt. 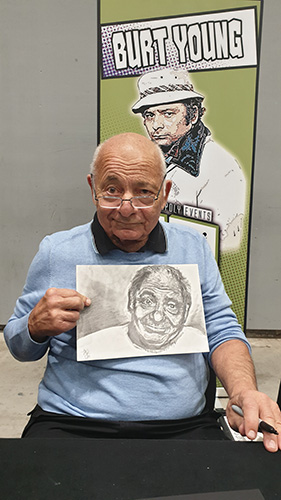 Next to Burt was Eric Roberts, and what a funny and engaging guy he is. The Q&A with him was fantastic and he was genuinely touched by the amount of people that surrounded the stage to listen to him. He didn’t want to leave the stage and insisted on more questions to be thrown at him, even after his allotted time was up. He was also particularly friendly when I had a couple of selfies with him…even instructing me on how to hold my phone to take the best photo (selfies are something that I rarely indulge in!). 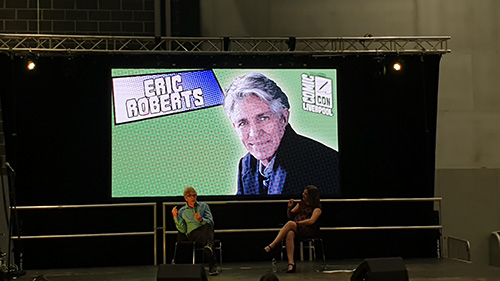 The biggest lines were to meet Teri Hatcher and Dean Cain, and though I didn’t meet them myself, I watched as they chatted merrily to everyone who had patiently waited to meet them. In fact, all of the guests were on top form and they definitely made the visit worthwhile to everyone who had bought tickets from all over the world (I met Vincent from the Netherlands who I spent the day with and now consider a friend…he’s a huge Rocky fan too).

Well organised (the photos are ready in less than a minute!) and with a superb array of stalls, attractions and guests, Monopoly Events have once again knocked it out of the park and put together another superb event where friends are made, memories are treasured, and dreams come true. I look forward to attending many more events by them.

Review by Dave (host of 60 Minutes With) with thanks to Monopoly Events for press access.

The Kris Barras Band to support to Black Stone Cherry Review: The Pretender