Back when I lived in Norwich, missing Magnum at the Waterfront almost became tradition. Every single time you could guarantee when their latest tour rolled through town I was either working or had other plans.

So I was thrilled to be able to finally be able to attend a show on their The Monster Tours tour. Like everything else, this had been delayed and rescheduled again and the crowd who gathered at the Islington Assembly Hall were very much up for the return of the rock giants. 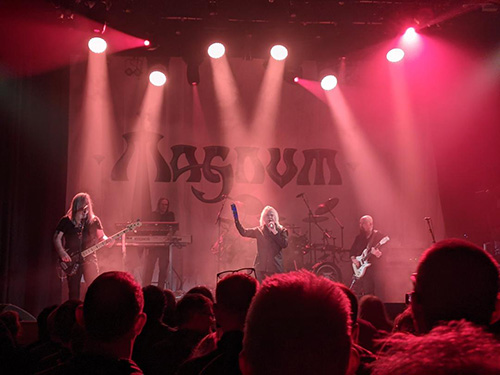 Kicking off with an epic rendition of Days of No Trust, the band went through some classic cuts from their lengthy back catalogue like Wild Swan and All England’s Eyes as well as some songs from their new album The Monster Roars.
A personal highlight for me came nearer the end of the set when they played Vigilante. An absolute banger, and for my money one of the greatest keyboard parts of any rock song out there. Grown adults were hugging each other and jumping up and down during it!
After a quick break, the band returned for an encore that included an equally well received On a Storytellers Night, Kingdom of Madness and Sacred Hour.
To end the show, Bob Catley (a founding member of the band, along with guitarist Tony Clarkin) led everyone in an acapella sing-a-long of where the show started, Days of No Trust, a song which lyrics are very apt right now with everything going on in the world –
“We’re all living under the same old sky
We’re all living telling the same old lie
In these days of no trust“
Review by Thom from a ticket kindly supplied by Palmer Turner Overdrive
Buy your tickets here.

Hi, I’m Thom. Been podcasting with Dave since 2012 (for my sins) and it continues to be a fantastic and rewarding experience. In addition to watching an abnormal volume of films of varying quality, I also spend my time on the crew of a wrestling company in London. Hope you enjoy all the audio entertainment here...and my reviews of course!