Review: Three Coins in the Fountain 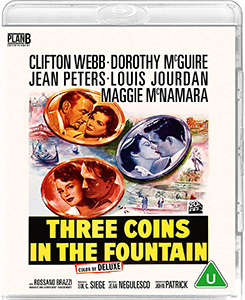 Three Coins in the Fountain is a 1954 American romantic comedy-drama film that tells the story of three American women living and working (as secretaries) in Rome who are looking for love.

This is typical 1950’s romantic fair in glorious colour with the difference that some of it is filmed on location in the Eternal city itself. But rather oddly, and remember this is decades before CG, scenes that begin actually IN Rome then morph mid-speech into a studio with a photo background.

Starring Clifton Webb as the obviously gay novelist Shadwell and Dorothy McGuire as Ms Frances, his secretary who is ‘madly’ and secretly in love with him (we only find this out on the last 10 minutes when they suddenly decide to marry, only for him to find out he has …some sort of illness that will kill him), along with the beautiful Jean Peters as Anita Hutchins who harbours a secret love for the gorgeous but poor Rossano Brazzi. Shockingly for the time, it’s strongly suggested they have SEX. And finally Louis Jourdan as Prince de Cessi, and Maggie McNamara as secretary Maria willaims who hatches a plan to get her prince by finding out all about him and pretending to like what he does to win him in marriage. Which all goes very well until she decides to tell him the truth.

It’s a bit of fluff of a film that your granny may have watched as a kid, my mother was certainly obsessed with it (along with anything Mario Lanza was in), and in an expected yet charming way, ends abruptly without any real resolution to any of the 3 loves stories!

On the plus side, seeing Rome EMPTY of sightseers is pretty amazing, and just popping to the ‘fountain of Trevi’ in the car and parking outside it is probably the best thing of all.