Last weekend, Sunday in particular, I had the absolute pleasure of attending MCM Manchester Comic Con 2019 with my sister. Oh boy, what an event, what to talk about first is the question?!

Let’s start from the very beginning shall we?

After a very, VERY rough nights sleep, I woke up at 7AM with 2 hours slept total, ready to get up and face the long, exciting day ahead of me! The plan was for us to take the 9AM train to Manchester and be at the convention for when the doors opened so we could catch some of the early panels!

Alas, the first roadblock of the day struck…the train at that time had been cancelled! So, a long, forced 2 hour wait for the 11:30AM train was upon us.

Once arriving at Manchester, we made our way to the convention hall at the ever so late, 1PM! Needless to say, we didn’t have to wait in line.

One of the main downsides to this was missing The RWBY Takeover panel that I was so looking forward to! The rest of the day made me forget entirely about that though! We headed inside, instantly, we are greeted with a fairly big MCM glowing sign with a giant black wall behind it…behind that wall, the convention truly opened up.

So many people, most in their own unique cosplays from franchises that they love, stalls FULL of merchandise with every 90 degree turn of your head and so much more! It was a difficult choice deciding where to wander off to first! But, we had a set plan. The autographs and photo ops with the special guests!

This year, they had some wonderful guests, some of which were: Sean Gunn, Michael Rooker, Bryan Dechart, Amelia Rose Blaire, Jen Brown, Samantha Ireland and Shannon McCormick! We headed to the main hall and got into line for my first photo shoot of the day. This one was with Bryan and Amelia! After waiting in line for 30 minutes (which was pretty short considering the mass amounts of people) I was face to face with 2 people that I respected in the voice acting community. You may know Bryan as “Connor” and Amelia as a “Tracy Bot” in the 2018 PS4 game, “Detroit: Become Human“. Sadly, as there were a lot of people waiting in line, I didn’t get the chance to stand and talk with them. But they were both two very lovely people who I hope to meet again in the future. 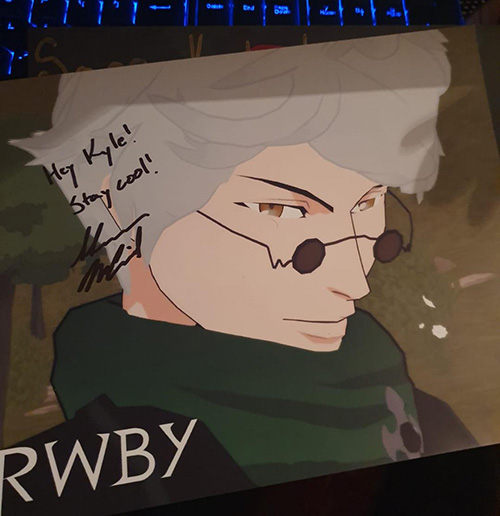 Next up, autographs from the people I was most excited to meet! The RWBY cast! Those being, Jen Brown, Samantha Ireland and Shannon McCormick. I was surprisingly able to walk right up to them without waiting in line! For once, I wasn’t shaken up by my own nerves and stood and talked with all three of them for a good 25 minutes! All three were the kindest people I have ever had the pleasure of meeting in my entire life. They were so upbeat and greeted me with a smile, joked around and gave me their own thoughts on the development of RWBY and even were so kind to tell me everything that happened at The RWBY Takeover panel that I missed out on! I handpicked out my 3 prints for them to sign and was on my way. This wouldn’t be the last time I got the chance to speak with them in the day though.

Finally, it was time to explore the convention hall! Walking back out into the main hall, we were once again faced with the choice of, “where do we start?“.

We decided the best course of action would be to wander around aimlessly and see what we could come across. The amount of stalls all selling their own merchendise was overwhelming, the choices, the variety, it was incredible! 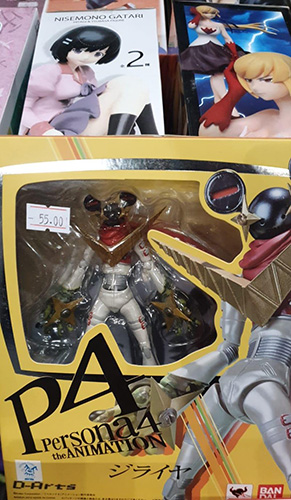 I’m thankful I had the willpower to keep my wallet in my pocket for the most part! Merchandise wasn’t the only thing in the main convention hall though. There were many other activites to partake in and exclusive games to try out. Such as Iron Man VR coming to PSVR later this year and the game that I am anticipating most this year…Borderlands 3!!! I hate to say, I didn’t get the oppertunity to try out either…Damn those long lines!!

It was amazing being able to walk around and to see all of the unique cosplays, I did take pictures of some of my favourites too! It is sad to say too that because of only being there for the final day (Sunday) and with the time we got there, we did miss out of some of the other events such as the cosplay competition and most of the other panels. 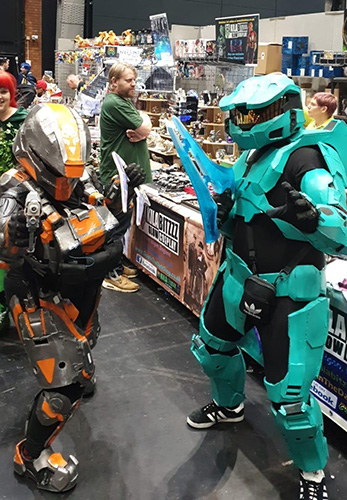 Time passed and it was time for another anticipated event, my photo op with Jen, Shannon and Samantha! Surprisingly, I was second in line for that one and was instantly greeted again by all three of them with a huge smile and them saying “Hey, it’s you again!“. So once again, I got to stand and speak with them all while having my photo taken.

Meeting those three was by far what made the convention for me personally and I will always treasure that memory. I truly hope I get to meet them at future conventions!

The rest of the day consisted of me and my sister talking and laughing with each other and some other characters that crossed our paths. Time seemed to fly and just like that, the convention was over. The stalls started packing up, security rounded up any straddlers that were still around in the hall and we all had to leave.

To my surprise though, on the way out, I caught a glimpse of a content creator that I have been following since primary school! Tomska! He is a YouTuber that created the hit animated shorts, asdfmovie! I ran up to him and asked him for a picture, he instantly smiled and accepted!

Now it was time to leave for real this time. This is where things went sour and we had a long, brutal 25 minute walk through the storm that just happened to hit us as we left! When I say you could squeeze the water from my clothes, I mean it. We got on the train and travelled home.

Once home, I got to sit, relax and reflect on the incredible day that I had. So many memories made, new experiences had and plans for future events thought.

To wrap things up, MCM Manchester was single handedly one of the greatest convention experiences I have had and will be anticipating the next one I get to attend. Hopefully that will be MCM Birmingham in November! The staff there did an incredible job organizing a memorable convention with many things to do, see, buy and people to meet.

I WILL be back!

Hi, I'm Kyle! I'm a huge video game fanatic and love to talk about what I've played, seen and listened to. I'm pretty new to the review scene, so I hope you all enjoy my rambles. Thanks for stopping by!
Review: Birds of a Feather ClintCast: A Fistful of Dollars