Review: Birds of a Feather 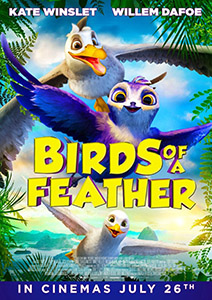 Manou the Swift (Josh Keaton) is attacked by rats when he is a baby chick and left alone to fend for himself. He stumbles across Yves (Willem Defoe) and Blanche (Kate Winslet), a pair of seagulls waiting for a chick of their own. They take Manou in and bring him up as their son, teaching him how to be a seagull. Yves and Blanche are eventually blessed with a son and he and Manou develop a strong bond. Despite his best efforts Manou doesn’t fit in and is forced to find his real family among the swifts. Although the swifts and seagulls share the island cliffs, they have nothing to do with each other. Can Manou and his adopted brother bring the seagulls and swifts together, whilst teaching them they must rely upon one another to survive?

The summer holidays are in full swing so there are a lot of movies being released in the cinemas aimed at little ones. My 7-year-old daughter and I sat down to watch Birds of a Feather, and it’s fair to say that one of us enjoyed it more than the other.

As with most animated movies these days, there are some recognisable voices in the cast. Willem Defoe and Kate Winslet are the main stars of the movie and they do a decent enough job. But you can tell the budget didn’t stretch very far, especially with Winslet who doesn’t feature much in the movie.

The animation was a mixed bag with some of the landscapes and vistas looking fantastic and very detailed. In comparison the close-up shots of the birds felt limited and a little cheap (no pun intended). However, I can’t be too critical, as it seems there was a very small team working on the movie.

In terms of the story there was some mild peril but not enough to scare young children too much. We chuckled a few times but there weren’t any real laugh out loud moments.

I really wanted Birds of a Feather to soar (pun very much intended) but for me it felt a little flat. There were no particular standout moments and as such it was fairly bland.

On the plus side, there is a strong message about working together rather than taking sides, and treating others differently because of who they are, or where they come from.

Despite my criticisms, my daughter enjoyed the movie and gave it a thumbs up. Whether she will ask to watch it again is another question. Personally, I think Birds of a Feather will struggle to find an audience in an already crowded market place.

Birds of a Feather (Manou the Swift) is available in cinemas now.

Review by Chris from a streaming link kindly supplied by Signature Entertainment.

I love video games and movies as much as I love my children. However, I'd rather face off against the worst end of level boss, and watch the scariest horror movie than visit another soft play! Thanks for taking the time to visit the website and read this review. Please send any complaints to Dave and any money to me!
Review: Escape Plan 3 Live Event: MCM Manchester Comic Con, July 27th – 28th, 2019