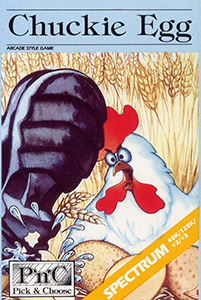 Seeing as it is Easter I was looking for a game to review that would tie in nicely with this time of the year. The only game I could think of involving eggs (Dizzy doesn’t count as I don’t think he is strictly speaking an egg) is Chuckie Egg so it’s time to revisit this classic game from the ZX Spectrum.

Like the best games, Chuckie Egg has a very simple idea which is easy to pick up and hard to put down. You control Hen House Harry who must collect eggs that are dotted around the levels whilst avoiding the patrolling hens. I say hens however; I believe they look more like ostriches in my humble opinion!

As you progress through the game the levels get tougher to beat as moving platforms and more difficult jumps are introduced. That being said, I found myself getting more and more into the game wanting to beat the last level where I died.

Chuckie Egg was made by Nigel Alderton when he was only 16 years old and I’m pleased (and slightly amazed) to say that it is still incredibly fun to play some 35 years after it was originally released.

Graphics: It’s difficult to be critical of a game that is 35 years old so although the graphics are basic they are also very charming and typical from that era. 6

Sound: There is minimal sound in the game and two songs that play including The Birdie Song which is genius! 6

Playability: The simplicity of the gameplay adds to the addictive nature and I’m happy to say that the game is still really fun. 8

Re-playability: There is definitely that ‘just one more go’ factor to the game and I couldn’t help but smile (and swear) whilst I was playing. 8

Overall: Chuckie Egg is a game that helped to define the 8 bit era with its excellent gameplay and distinctive look. The bottom line is that Chuckie Egg is still a really fun game to play and a classic from the 80’s. 8

I love video games and movies as much as I love my children. However, I'd rather face off against the worst end of level boss, and watch the scariest horror movie than visit another soft play! Thanks for taking the time to visit the website and read this review. Please send any complaints to Dave and any money to me!
Interview with Gary Tunnicliffe Review: The Parkinsons – A Long Way To Nowhere