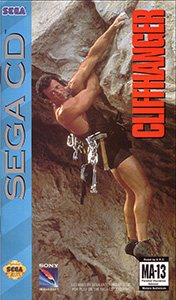 Out of curiosity I’ve decided to take a look at movie tie-in games for my next few retro reviews. I’ve previously reviewed some Sylvester Stallone games including Rambo 3 on Sega Megadrive and Rambo 3 and Rocky on Sega Master System. Now it’s time to head for the mountains to see if I can thwart baddies from stealing 100 million dollars in the blockbuster Cliffhanger.

I remember seeing Cliffhanger in the cinema and thought it was a great action movie with some incredible stunts! I felt that it showed a different side to Stallone who played a reluctant character full of doubt and regret. Let’s face it; there aren’t many action movies that start with the hero being blamed by his best friend for the death of a loved one!

I played the Megadrive version of Cliffhanger once during a brief rental from my local video shop Hollywood Nights. I recall that it wasn’t great, so I was curious to see how it played on the Mega CD, or Sega CD as it was called in North America.

I know that time and history isn’t kind to the Mega CD with its poor attempt at full motion video (FMV) and paper thin library of decent games, but I absolutely loved mine. I have very fond memories of playing Lethal Enforcers, Thunderhawk, and one of the best home conversions of the amazing Final Fight.

Cliffhanger the game follows the plot of the movie fairly closely and there are lots of grainy FMV clips included to remind you of the story. Early CD based games didn’t know if they wanted to be a game or a movie and generally ended up being half-arsed attempts at both. Games like Night Trap and Ground Zero Texas tried to be interactive movies, but all they demonstrated was that the most important feature of all was missing; gameplay.

Interspersed between clips of the movie are sections of not very good gameplay. Essentially Cliffhanger is a side scrolling beat-em up with a bit of platforming….bad platforming! You can punch and kick enemies, (which all look the same) but the gameplay is fairly uninspiring and becomes tedious quite quickly.

There are some climbing sections where you have to dodge enemy gunfire that had me screaming bloody murder. The main issue with this is that it seemed to be one hit and you were knocked off the cliff. Many of my lives were wasted until I discovered a trick to help me stay stuck to the wall like a terrified limpet!

Worst of all the gameplay though is a feature that was made especially for the Mega CD. I’m sure many of you have seen Cliffhanger. Let me ask you a question. Do you remember the scene in the movie where Sylvester Stallone snowboards down a mountain to avoid an avalanche? Neither do I but guess what, now you get to fulfil that fantasy in all its terrible glory!

There is initially a novelty factor with this level and to be fair it looks decent, but by god it plays like utter shite! The main issue is that it is too damn hard and you either die because you hit too many objects, or you get caught by the avalanche because you hit too many objects! As you will see from the video, the air was turning blue whilst I was playing this section.

Graphically the game looks ok with similar settings used in the film and the main character looks like Sly, but it is nothing special at all. One of the few benefits of early CD based games was the inclusion of digital sound and it appears that the soundtrack is lifted straight from the movie.

Cliffhanger goes to prove the theory that most movie tie in games are a bit crap! Despite the added “power” of the Mega CD and inclusion of a brand new snowboarding level, the game is a bit rubbish and not really worth your time. Anyway, check out the video below to hear me swear a lot and let me know what you think.

Graphics – Decent representations of the movie but nothing special. As you would expect the FMV is suitably grainy. 4

Sound – Thanks to the CD based system, we are treated to music which is taken straight from the movie. 5

Re-Playability – I probably would have another go at Cliffhanger if it wasn’t for the shocking snowboarding section. 2

Overall – Cliffhanger is like many film based games in as much as it takes elements of the movie, but ultimately lacks any kind of interesting gameplay to keep you entertained for very long. Disappointing! 4

I love video games and movies as much as I love my children. However, I'd rather face off against the worst end of level boss, and watch the scariest horror movie than visit another soft play! Thanks for taking the time to visit the website and read this review. Please send any complaints to Dave and any money to me!
Review: Breaker Morant New track from ‘Legend of the Seagullmen’