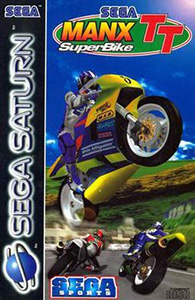 To conclude this month’s Sega Saturn coverage I’ve decided to take a look at a game I’ve never played before. So it’s time to get your leathers on and polish your helmet (oh matron!) for some two wheeled action with Manx TT Superbike.

The Sega Saturn is home to one of my all-time favourite racing games with the amazing Sega Rally. I reviewed it a little while ago and you can check out my thoughts here. Although I have never played Manx TT Superbike, I had fairly high expectations as it was another Sega arcade conversion, but would it take pole position from my beloved Sega Rally?

Before I get into the game I thought I should mention how I came to own it. Last year I attended a retro videogame event called Revival which has found its new home at Bank’s Stadium in Walsall. It is a retro gamer’s vision of heaven as there are loads of arcades and consoles to play, as well as plenty of traders, which is how I originally came home with Manx TT Superbike. For a more detailed review of Revival please click here and make sure you go to the next show which is due to take place on 19th and 20th May 2018.

Anyway, back to the review. My first impression of the game is that it feels a bit limited with only two tracks to race on, a lack of motorcycles to choose and few modes to play. I suppose on the flip side of the coin you probably wouldn’t spend hours and hours playing as it was designed to give you a quick arcade fix rather than prolonged play.

One of the most important aspects of any racing game is the handling of the vehicle and unfortunately the motorcycles feel a little bit loose and lightweight meaning I was crashing quite a lot of the time. This could be down to my skill (or lack of) and the fact it was my first time playing the game, however, the bikes definitely felt a bit floaty.

During the game you can choose to view the action from behind the bike or directly from your racers eyes. The chase view is fine but switching to the other camera is very jarring and made me feel a little bit nauseous. The main reason for this is because the camera tilts as it tries to simulate what it feels like to be on a bike, but because it moves so quickly I found the movement too erratic.

The graphics are generally very good and have the classic Sega style from similar games such as Daytona USA and Sega Rally.

Manx TT Superbike is a decent game and I’m glad I finally played it but unless you’re an absolute bike nut I’d probably recommend you play other racing games that Sega produced in the 90’s.

Graphics: The visuals look like classic arcade games which Sega were masters at creating in the 90’s. 7

Sound: There are some decent sound effects and speech but I noticed it played the same song which was quite repetitive. 6

Playability: The game is good fun but the handling of the vehicles isn’t what I would like it to be….or maybe I’m just crap at the game? 6

Re-playability: There are few options to keep you coming back for more so I doubt I’ll be returning anytime soon. 5

Overall: There is some fun to be had with Manx TT Superbike but the poor handling and lack of options mean I’ll probably go back to my favourite Saturn racing game Sega Rally. 6

I love video games and movies as much as I love my children. However, I'd rather face off against the worst end of level boss, and watch the scariest horror movie than visit another soft play! Thanks for taking the time to visit the website and read this review. Please send any complaints to Dave and any money to me!
Interview with Lori Cardille BlackWater HolyLight premiere new track