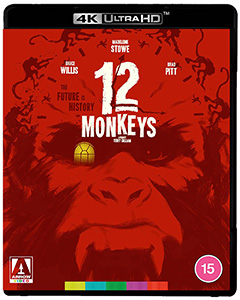 Bruce Willis and Brad Pitt are both on the top of their game in this fantastical tale directed by Terry Gilliam (directing a script not by himself for a change).

Willis stars as James Cole; a prisoner from 2035 who is sent back to the 1990’s to try and get information on a virus that has devastated the worlds population, leading the few remaining survivors to live underground for fear of contracting this invisible enemy that floats in the air above.

The time travel however doesn’t go as planned, dropping Cole into 1990 instead of the required 1996 when the virus began. It is while here that he is put into a psychiatric facility and meets scientist Dr. Kathryn Railly (Madeleine Stowe) and fellow inmate Jeffrey Goines (Brad Pitt).

Goines is the crazy son of virologist Dr. Goines (Christopher Plummer) and is key to Cole discovering the truth of what began the virus outbreak. While Railly questions the validity of Cole’s time travelling stories, circumstances lead her to believing that he just might be telling the truth.

Returning to 2035 Cole insists that he can find out more if sent to the correct time period, and so, via a brief sojourn in WW1, he finally arrives in 1996 to try and solve the mystery.

Can Cole find the secrets to the virus? Is Goines really a part of everything? Is it all just the delusions of a madman? All of these questions and more are asked and answered while watching 12 Monkeys.

This 4K UHD release isn’t as much of a visual showcase as some of Arrow’s previous 4K releases, though this is due in part to the original cinematography of the movie. Close up facial details have a noticeable improvement, as do some of the more vibrant colours which are mostly displayed in the movies 3rd act, while film grain is very noticeable throughout.

The special features are fantastic, especially feature-length making-of documentary “The Hamster Factor and Other Tales of Twelve Monkeys”

A brilliantly crafted narrative and superb performances across the board make for an enthralling 2 hour journey as your 1st viewing is taken with wondering what is and isn’t real. Subsequent viewings allow you to sit back and enjoy this wonderful tale which Terry Gilliam imbues with his own inimitable style.

A thought provoking and conversation inducing experience, 12 Monkeys is just as powerful (if not more so after what happened in the world during 2020 and beyond!) as it was back in 1995.