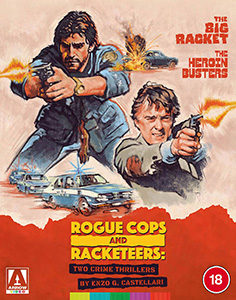 Sent to small Italian town, Palmieri and his partner take on a gang of criminals who have a racket demanding ‘safety’ money off all the local businesses not to smash up their shop. The gang rampage thorough the town and when Palmieri follows them to a meeting with their boss, he’s seen and they roll his car down a hill injuring him.

The only way Palmieri can stop the gang is to get one of the victims to testify against them, but no one will as they are all terrified, until the café owner agrees after the gang threaten to attack his daughter…which they carry out when they find out he has reported them.

As with most poliziotteschi films the plot is labyrinthine with various good and bad guys that interweave the story.
Losing his job in the police after the death of his partner by the gang, Palmieri concocts a payback by gathering his own group of ex-criminals and victims of the gang to finally put an end to their racket.

I think Italian crime films in general are ‘different’ and fill me with a sense of unease, this one in particular as the violence in this film, particularly against women, rings true. Rape as a punishment and weapon of control, and the camera doesn’t flinch from this.

The Heroin Busters stars most of the actors from The Big Racket, including the lovely Fabio Testi. Beginning with a whirlwind journey of drug traffickers across the world, the story kicks off from a slow start to the usual violence, drug taking, car chases and fighting. No rape in this one, just a long lesbian scene, where luckily the actors long hair hide all the ‘action’.

David Hemmings is great as a shouty Interpol officer on the track of a network of drug dealers. There is some incredible stunt work (including a chase involving 2 light aircraft), imaginative action sequences, and all accompanied by some cracking music from Goblin.

Disc One – The Big Racket:

I used to live in Los Angeles and write about Rock bands. Now I live in wonderful Wales and write about films. I like video games (especially RDR2) and am also a painter...gratuitous plug: follow my art account on Instagram @artbytinar
Review: 12 Monkeys 4K UHD Review: Trolley Problem, Inc